Yeah, I know.  I know.  I don't really think that my late father exists in a capacity that he can summon birds, whose language he did not speak when he was alive, likely cannot speak now.  Especially given that he was cremated and his larynx, as we knew it, does not exist.

But he sent me birds when he was alive.  I have proof.

And I believe that somehow, energy that was created by my father at some point in time lead to birds finding their way to me in current day.  It's less magic and more science - you know, matter cannot be created or destroyed?  That.  Basically that.

Last night, I was out back with my dog, and I heard an owl, hooting.

Now, I live a few minutes from downtown Nashville, so I wasn't exactly expecting to hear it.  Honestly, I thought one of the college kids was screwing around.  But it kept happening, and I realized the sound was coming from overhead.  So I scanned the treeline and realized we had a genuine owl.

I sat and watched for a bit, then it swooped down in front of me and lit in a tree almost directly above me.  It was MASSIVE.

Turns out we had ourselves a Bubo virginianus.  A Great Horned Owl.  They're the biggo ones with ear tufts.  He and I looked at each other for awhile.  I called to him, he looked at me like "Not bad, but I know you're a human."

My father loved owls.  One of the last Father's Day cards I ever gave him featured owls:

He had some owl art he found at a thrift shop that hangs in our cabin.  We supplemented it over the years with figurines, sculptures, doodads, and once, a stuffed animal we found at a toy store down the mountain.

So, while I didn't think of it while we were chatting, me and the owl, eventually, he flew off, huge and magnificent and perfect.  And I said, without thinking, "Thanks for the owl, Dad".  And it's one of those things that I said and immediately realized it was true.

I think the owl found me because I needed a little in-flight reassurance from the universe that the energy is out there, that the birds will appear for me as needed from time to time, and that matter cannot be created, nor destroyed.

Look, if millions can believe that the earth is flat, and that climate change is a hoax, then I can believe that my dead father can somehow direct birds to me.  And it's not that far-fetched.  It's not like he sent me a painted bunting: 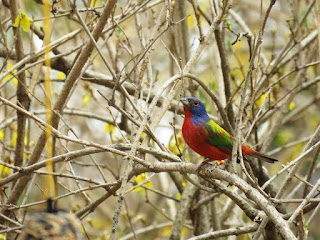 Though if he did, I surely wouldn't object.

Christopher said…
There's a fair number of trees around us so we hear Great Horned Owls fairly regularly, but not in the winter. And the ones we hear are gullible (no pun intended) enough to respond to being called.
In short I'd say there must be something pretty special about the owl who visited you, and I'm glad you're taking reassurance from it.
January 9, 2020 at 2:43 PM