on March 03, 2013
I went to see my parents this weekend.  Long drive down to Atlanta, with it spitting snow til I hit the Georgia line.

Saturday morning, we slept in.  After breakfast, Mom had to get ready for a luncheon for a girlfriend - Dad and I sat at the table drinking coffee and watching the birds in his backyard.

I mentioned how I always hoped I'd see a Cedar Waxwing.  They're not rare, but they're not like seeing a Robin, either - they're Winter Only in my area, and since they're fruit eaters, my treeless yard isn't exactly a Waxwing sanctuary.  Dad only sees them flying through migratorily, once a year.

About twenty minutes later, a flock of about a dozen birds landed on Dad's birdbath.  I didn't recognize them.  Dad did.  Cedar Waxwings.

Within twenty minutes, the backyard was covered in them.  Dad's holly tree was alive with them.

This is a Cedar Waxwing: 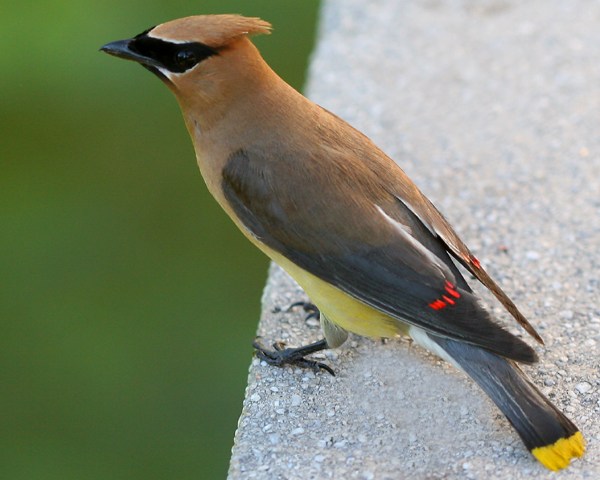 See the tiny little tips of red on the wing?  They look like they were dipped in sealing wax.  SO PRETTY.

So, remember the other day when I said you shouldn't making deals with the Universe?

But... apparently, sometimes you ask the Universe for what you want, and it delivers it.  In a big way.

That is definitely magic.

Chuck Baudelaire said…
I don't think we have waxwings in North Texas. I imagine seeing a flock of those pretty things would be a bit more magical than the gangs of punk-ass grackles that congregate everywhere around here.
March 4, 2013 at 8:03 AM