Zebra Cake, Chocolate Ice Box Cake – it goes by a lot of names. 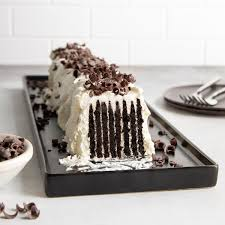 What it is, is a dessert made by stacking Famous Chocolate Wafers and whipped cream into a log or loaf shape and letting the cream soak in, rendering the wafers cakey, then serving with a little chocolate sauce.  The wafers alone are kind of dry and not especially tasty.  I assume you could make a similar dessert with Oreos, but I bet that would be overly sweet, and the Oreo filling combined with whipped cream doesn’t sound great.  This dessert is rich.  I can still eat a slab of it, without complaint - but it will lay there in the belly like a cream brick.

We always called it Elephant’s Trunk, and it typically made an appearance at Christmas. For my grandmother’s birthday, once, they made one in the shape of the number 80.  We even had a specific silver tray that was long and narrow, designated for making Elephant’s Trunk.

When Matt and I were dating, we came back to my apartment right before Christmas, and listened to my mother’s frantic, winded voice on my answering machine, letting us know that she was headed to Kroger to get the ingredients for Elephant’s Trunk.  After a minute, Matt asked, “What’s Elvis Truck?”

Now, I call that special dessert Elvis Truck, because, why not?

We haven’t made it in years – it’s a great dessert, but there are others that are simpler, and in my opinion, better.   I just talked to my sister – she’s making it for their Christmas.  It’s good to have some traditions live on.

Matt and I will be spending Christmas in Nashville with our special pup, and I am going to Atlanta after the first of the year.  We’re both sickly, it’s a long story, and I’ll explain it some other time.

But that means we’ll be having our Christmas dinner here in Nashville, and I think it’s going to be spaghetti.  Because, tradition, and it’s also easy.  Those are two important criteria.

You have to be flexible when it comes to tradition.  Several years ago, I offered to do spaghetti for Christmas Day dinner because it was always our traditional Christmas Eve meal.  But now, with the blended family, we celebrate Christmas on the Eve.  So that meal was spoken for by the hosts.

Anyway, I was all set to pasta it up, and I was told that the tribal elders had just “decided” that we weren’t going to do spaghetti, we were going to do beef tenderloin, because that was “more festive”.  At my mother’s house.  Well, I spent an entire session of therapy losing my shit about that.

One of the reasons I like to cook spaghetti for a crowd is that much of it can be prepared in advance, and at the last minute, you can drop the pasta in the water, and you don’t have people hovering over you while you execute something that requires great precision and concentration, like, say, cooking a very expensive piece of meat.  While five other people are in your space prepping the rest of the meal.

It ended up OK – I didn’t cook the meat – I concentrated on the rest.  But the kitchen was a complete mess afterward, and it was just much ado about nothing.  The next year, I forced my hand, and I made spaghetti, and it was freaking amazing.  Nobody else had to lift a finger, and the clean-up was much easier.  It was so well received that it was requested again the next year.

I haven’t made Elvis Truck in years.  I know that this is not the year to start.  But we’ll get there.  Some day.