I was at a party last night, and Thornton Wilder's Our Town came up.  After which, some feelings that had been long simmering came to a boil.

I'll start with my freshman year of HS.  The much beloved drama teacher retired the year prior, and we were graced with a former student turned teacher who was kind of a hot mess.  I don't remember anything but her first name - and to protect her, we'll call her Ms. C.  Well, she was off the rails, apparently had an inappropriate relationship with a female student, and that was that.  She was gone at the end of the year.  The next year, we had Mr. G.  He was also a former student turned teacher - and I think there's something kind of weird about going back to your high school to teach, because he was also a trainwreck.  They released him after a year, but he came back my junior year to do volunteer drama work with us.  He was beloved, at the time because of his "stick it to the man" cool vibe.  But he wasn't fully present, and we were kind of left to our own devices.  We called the drama group the Vagabonds - as in, no visible means of support.

My senior year, they brought in a woman we'll call Doris Pink-Lake.  Not her real name, but close enough.  People were angry that Mr. G had been replaced by Doris, and they were vocal about it.  I tried hard to rally the troops in her support - I was president of the drama club that year, and looking forward to finally getting down to brass tacks.  She made me stage manager of our first production - one that I would have played either lead really, really well. Or any of the secondary roles.  Female version of The Odd Couple. I ended up shuttling the younger cast back and forth from the school to our production location.  I wasn't happy.

When Doris told us she was going to put on Our Town for the winter play, I was skeptical.  And then she told us her husband was going to play the role of narrator*.  I was vocally skeptical.  As a result, she took me aside and fussed at me, then froze me out for the rest of the year, and I was done, dramatically speaking.  There is a chance I would have been cast in the spring musical (the queen in Once Upon a Mattress, probably) - but by then, I was totally done.  I was interning at Cox Media, I was writing prolifically for the school paper, and I was frankly, done with the woman who I had championed, and who kicked me in the teeth for my trouble.

She went on to be much beloved by the folks younger than me in drama.  The last time I saw Doris was at an improv festival in Atlanta - I was performing with Gorgeous Ladies of Comedy, and she was there with an improv troupe from the HS.  I ignored her, she ignored me.  I had a degree in Journalism, a nice apartment, friends, a job, a boyfriend.  She was still Doris.  Those who can't, teach, right Doris?  I'm onstage, and you're you.

Anyway, Our Town came up last night, and I kind of just erupted about it.  I even made a joke about erupting on FB.  One of my friends from drama replied with the laughing emoji.  I don't think she appreciates the amount of trauma the whole thing caused me.  I used to love drama.  I think I still would.  But Doris wore me down, wore me out, and had no idea that I had her back long before she stabbed me in mine.

And I remember being in my father's truck with him not long after it went down, and he was indignant on my behalf, which was comforting, and that of course made me sad last night.  So, you know - I am hard core in my feelings over something that happened over thirty years ago.

So, anyway.  That happened.  Now, I have no idea whatever became of Ms. C - I can't even remember her actual name.  Just her first name.  As for Mr. G - well, his cool persona came back to bite him.  A few years back, I read that he, in a different county, some time ago, was incarcerated for having relationships with a student or two.  This is apparently a drama teacher occupational hazard. 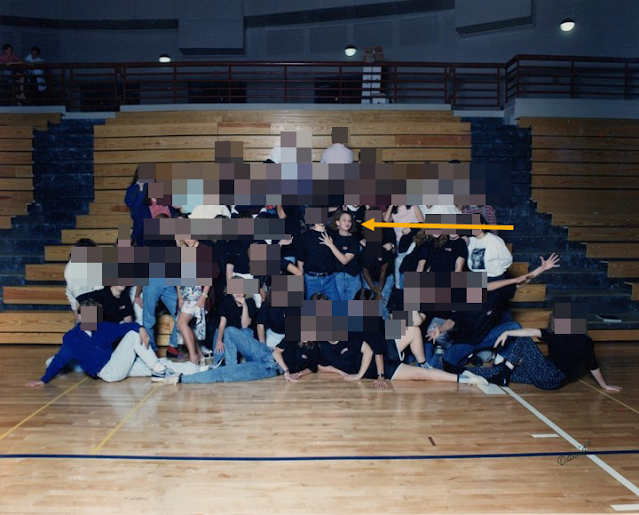 Sophomore Year As a Vagabond - Pre FUBAR (blurred to protect the guilty).

So, that's what had me awake late last night.

*How would I have handled it instead?  I'd have either picked a play that didn't need her husband as our lead actor, or - I'd have split out the narrator role into a half dozen smaller narrator roles and done something kind of artsy with it.  That's just me, though.

Christopher said…
I'm glad you succeeded where Doris failed. Or at least turned out better than she did. But also sorry you didn't get to do something artsy with Our Town like splitting up the narrator into multiple roles. That would have been cool.
Although it sounds like she just wanted to throw something to her husband. The narrator doesn't have to be played by an older person. Besides it sounds like a conflict of interest that she'd be sleeping with a member of the cast.
November 7, 2022 at 2:26 PM