Here's a little something fun you may not know about me.  When I was in 8th Grade, I was on the Jr. Academic Bowl team - one of two girls - the other, Leslie (whose last name escapes me) rarely got playing time.  I was typically the token female on the team.  The boys were of the highly intelligent, socially challenged variety, mostly.  We would practice after school - my specialty was all the right brain stuff that the boys didn't care about - music, literature, art, languages, health - the boys handled the rest - sports, math, science, history.   There was no pop culture in Academic Bowl.

As it turned out, we were a decent team.  Formidable, even.  We ended up State Champions, and with that, I officially peaked in Middle School.

One of the boys ended up being my first quasi-boyfriend.  I mean, we didn't date, per se, but there was some light making out behind the school after practice, and once or twice, he went to second base.  What there was of it.

Anyway, we were very good at trivia.  I'm not here to talk about my 14th year, romantically - as scintillating as it wasn't.

These days, one of the local radio stations has a morning contest - the $1000 Minute.  If you can answer ten questions in sixty seconds, you win $1000.  Naturally, I listen every weekday morning at 7:25 to see how my fellow Nashvillagers are doing, trivially speaking.  It's a real mixed bag.  Obviously, it's one thing to play along with the radio, and something entirely different to do it live on the air (or, honestly, probably pre-recorded "as live" on the air).  But I have some concerns about the general knowledge of some of our citizens.

There is usually something pop-culturally relevant to Nashville - whether sports, music, celebrity, monument.  There's typically a basic math question.  There's usually a "what color are..." question, something current events-ish - but more human interest than news.  There may be something vaguely science or health related.

On any given day, I can manage 7 out of 10 no problem.  Some days, I'm 10 for 10.  But typically, I either match or beat the person on the radio.  Today, the woman playing had some serious trouble getting through them.  How many legs does an ant have?  What couture logo is comprised of two interlocking Cs?   Yesterday, someone didn't know that the three little kittens had lost their mittens.

All I can say is that if they called any of us from the 1989 Jr. Academic Bowl State Championship team, they better hit up the ATM first. 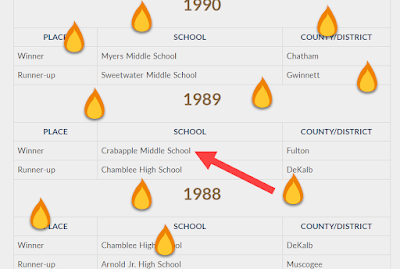 Ants have six legs, and it's Chanel.  Also - Calvin Coolidge was our go-to response for any Presidents question - in practice.  In reality - we had a few people who were good at presidents.

*Confidential to A.S. - if you're reading this - you weren't very nice to me.

**Confidential to C.F. - If you're reading this, I should have been nicer to you. Sorry.