I had been seeing this ad for a journal on my social feeds, and I thought, yeah, that looks good.  It's called Burn After Writing.  It was $10 on Amazon. 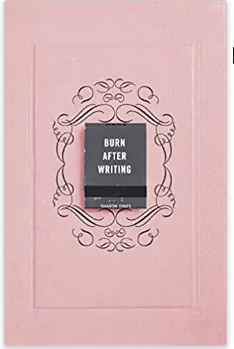 So I bought it.  It's helpful in that it offers concrete writing prompts that aid in omphaloskepsis - which is the fancy term for navel-gazing.

I like it - it's got some good jumping off points, but what it makes me realize is that I am never too far from feeling sorry for myself.  And that's not great.

I mean, I like knowing that I can function in the space of bittersweetness - but I really wish I could stop wallowing in the kiddie pool of sadness.  So shallow!

I mean, there a lot of  "the worst/hardest/saddest" and "the bestest/mostest/amazingest" where the answer is Dad.  Either his illness and death (the former), or the advice he gave and the love with which he raised me (the latter).   He was such a central figure.  And I really, really, really miss him.  So, that's been a challenge within the journal.

Meanwhile, I got some unsolicited advice from two people last week - and they both seem to be advising similarly.  If they knew each other, I'd say they were in cahoots, but they don't, which just means... something, right?

Ok, well, I'll ruminate on that, and we'll come back to it at some point.

The Labor Day weekend was both amazing and way too short,  You know how it is.  I did some recreational sleeping, a boatload of laundry, some decluttering, a few social-ish activities, too much eating - the usual.

Last night, after watching a kind of silly sci-fi movie about a giant octopus (It Came From Beneath the Sea), I suggested a double bill with My Octopus Teacher.  I thought it was going to be good.  And the cinematography was.  But the narrator of the film (the My, if you will), was a douchebag.  He was trying to deal with his midlife crisis by apparently ignoring his family and retreating to bottom of the kelp forest near his home in South Africa.  He was a total narcissist, and acted like he was king shit of turd mountain - and that he and this octopus bonded, and she trusted him.

We were making fun of it, and honestly, this IMDb review says it better than I can:

Neither movie was all that special, but if it comes right down to it, watch It Came from Beneath and enjoy the Ray Harryhausen special effects.

Christopher said…
I've been meaning to watch "My Octopus Teacher" because I have a lifelong fascination with octopuses (I know, so cliche, but I don't know many other people who explained octopus sex to their grandfather when they were six) but now I think I'd rather watch a Harryhausen documentary. In fact I have watched a Harryhausen documentary as well as "It Came From Beneath the Sea" and several other of his films--another lifelong fascination.
There was a point here I was trying to make and it had something to do with that journal and the idea of burning what you wrote. That's an interesting idea. But not all you write is omphaloskepsis, and a lot, including memories of your father, is worth preserving. Don't burn it all.
September 8, 2022 at 4:39 PM