When it comes to knowledge, I'd rather know a little bit about a lot of things, rather than a lot about one or two things.

I mean, ideally, I'd like to know a lot about a lot of things, but that's not the way my brain works.  Sometimes I think my mind is like a recalcitrant vending machine - it typically spits out the candy bar (in this case, the info I need), but sometimes that Kit Kat hangs there and you can almost taste it, but it won't come loose.  Sometimes, you need Bugles, or cheddar sour cream Ruffles, and the vending machine is all, "We have vinegar and salt chips, and an expired bag of pork rinds, and that's it."

But as we know, I have breadth, if not depth.

I went tubing this weekend.  For the uninitiated, it's what it sounds like.  A large innertube, a body of water, and people.  In this case, the body of water was the Harpeth River, and the people were the folks I do an annual group trip with.  Over the years, our trips have grown far more sedate, and infinitely less fueled by beer.  I don't know if we cracked open a single beverage on the river.  After a 2.5 hour float, we had a cookout at Robert and Tracy's house.  This time, the kids were all there waiting on us.  So I got to meet /re-meet all the progeny.  It was a good time - we ate, we petted the dogs - Percy and Izzy, the Goldendoodle sibs.  We talked and laughed and caught up.  It was a good day.

Yesterday, I did groceries - we were low on everything, so it was a sturdy shop.  I had class in the afternoon, so that was fun.  It was Mikaela, again - and I like her teaching style.  I have a few moves down so hard I can do them in my sleep.  Others - Irish, Buffalo, Maxie Ford - not so much.  If it involves hopping, I'm basically screwed.  But I still enjoy it.  I'm thinking of taking a break in September, and rejoining the world in October.  I don't know, yet.  But given that we're at the ass-end of August, I should probably start figuring it out.

Meanwhile, the world keeps on turning at the office.  There are supposed to be some folks in the office this week, and that's a good thing, I think. I am starting to prep for some training for next month, I've got the September newsletter submitted for approval, and I have some ideas for a few other creative endeavors.

I'm also about to buy some new bras, because I desperately need them.  My current stash is down to threadbare, graying bits that are thisclose to failing.  It's time.  Granted, I have standby options, but for day-to-day utility needs, I have to make some purchases.

Look - it's not all river trips and cookouts.

Sometimes it's spreadsheets and underwear shopping.

That's what makes the world go around. 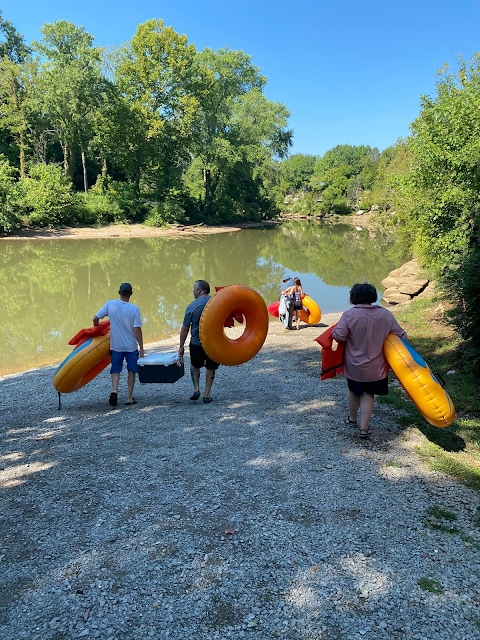 Christopher said…
So far the only real tubing I've ever done is in one of those lazy river pools, or in the lake at summer camp which doesn't really count, but it seems like fun even without a beverage. Of course it's the friends that make it.
Sometimes we need these inconsequential diversions. They make the consequential diversions so much more bearable.
September 2, 2022 at 8:11 AM