There is a saying that tragedy + time = comedy.  And that's true. What they don't tell you is, the older you get, the less time required.

Last Thursday, I sat on I-75 South for three hours to move five miles.  Yeah, it was torture.  But then, I got off the interstate, and I eventually made it to my destination - my family's mountain cabin.

The next morning, I realized I did not have the tools needed to complete some work I had to do, so I took myself to the nearest Walmart (a 45 minute drive) and bought a push lawnmower.  I spent five hours mowing grass when I could have sucked it up and begged for mercy and help.  I do not like to be a damsel in distress, so I'd rather push my limits and a lawn mower.  I'm proud of my accomplishments. 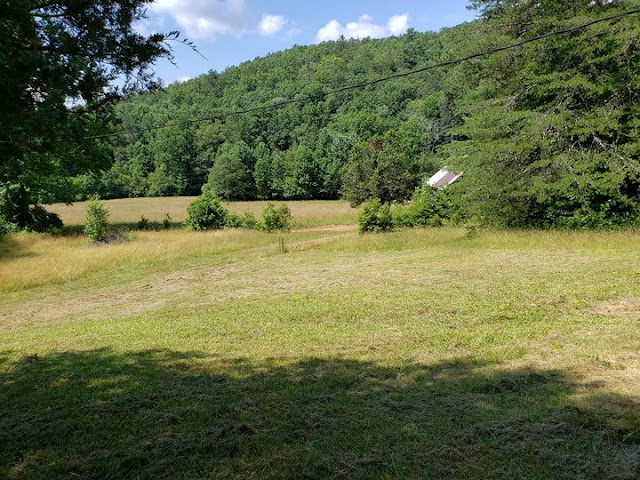 That night, I gritted my teeth and took two Benadryl in lieu of a pain reliever, because we didn't have any at the cabin.  Well, we did, but it was expired six years ago, and was basically a bottle of gritty lumps.  Pass.

The next morning, I woke up and went to our annual meeting.  We took care of business, and I cadged a pair of Advil from a grownup more prepared than me.   Thank you, Katie.  For reals.

After the meeting I did some party prep, then took a nap and waited for Mom, her pugs and her boyfriend to arrive.  When they did, Mom had been sick in the car and needed to clean up a bit.  Her boyfriend needed a sandwich, the dogs were wandering all over hell, and it was a little chaotic.

We all got settled, and that's when the rain began.  Buckets of it.  Just everywhere. Boyfriend was napping, and a few minutes into the storm, I realized his trunk was open.  I went and slammed it shut.  I figured with an hour til the party, nobody was going to come.  So I suggested we hold it indoors, and started fixing the chairs for that option.

At which point, the rain had stopped.  So we did a quick pivot and ran around getting the outdoor space.  And by we, I mean me.  I was trying to also stay out of boyfriend's way while he patted down a few items from his trunk that were wet.  I was also encouraging my mother to change into her party attire, and I stole a few minutes to do the same.

The party went perfectly - the kids had fun, the grownups had fun, and nobody got sick, or hurt, or whatever.  It just came off at the last second.

Then, we cleaned up, I took a disco nap, and we drove to the pond for fireworks. They were awesome.  I got to hang out with a bunch of people I adore, and we cheered and laughed and clapped.

We got back to the cabin and slept like logs from the pugs to the people. I got up the next morning, spent some time packing and chatting with Mom, and got back on the road.

I made it home in record time.

The rest of the weekend was pretty dull, but I was able to scrub off a few layers of dirt, attend to bug bites, and cool off for the first time since I got to Georgia.

The bad traffic, the lawn issues, lack of pain meds, cramped damp spaces, uncertainty - it had plenty of  quasi tragic moments, but I look back on in now?

Christopher said…
That reminds me of a story I heard many years ago at summer camp of a man who made an arduous journey through the woods. He had to sleep overnight in the middle of the woods and had a dream that he was to pick up all the pebbles he could carry. He did and when he got to his destination the next day all the pebbles turned to gold.
Kind of obvious, I know, but, yeah, as we get older it does seem to be more and more true.
July 7, 2022 at 3:19 PM