So a couple of things here:

1.  Listen to your body.  I had to go to the doctor last week because they were holding my scrips hostage.  It happens.  The NP that I see these days is cute, and focuses on reinforcing all the things I am doing right instead of hassling me about where I fall short.  Anyway, when the nurse asked if I was having any issues, I asked if the NP could take a peek at my ears, because they feel congested, occasionally to a level of discomfort.  I assume it's sinuses, but could they have a look?

So she did, and shockingly, I knew exactly what I was talking about.  There's considerable fluid in there - no infection, but certainly enough to cause discomfort.  She recommended a nasal spray and a decongestant to clear it up.  But kudos to me for knowing what's up.

2. I made gazpacho.  I made some gazpacho over the weekend and it is stellar.  I have to say it's a soup I have basically nailed.  Now, OK - yes, I do use V8 as my base, and I regret nothing.  It's just a good, cold, refreshing thing to have around the house in summer, and I could eat myself sick on it.

3.  I am late to the party.  We just finished the first season of Feud, which came out about six years ago - it's the story of Joan Crawford and Bette Davis' life long hatred of each other, framed by the making of Whatever Happened to Baby Jane?  Which is a great movie.  Both Lange and Sarandon killed it, and I enjoyed it - especially the costumes.  I love a good gown, pretty suits, gloves, hats.  HAT PINS.  We live in a far less glam world.  Highly recommend, but I'm sure you have already seen it.

4. End of an era.  Learned that one of my favorite people is leaving my company at the end of August.  Which is sad.  Very sad.  It's not entirely unexpected, but still sad.  Is it better to be the one leaving, or the one left?  That's a good question, and it kind of depends.  I typically think the advantage goes to the one leaving because they may be sad, but they're distracted by all the new-ness.  It's why, when I left my last gig (over five years ago, now), I didn't feel sad.  A little - but not bereft.  This one will be tough - not just on me, but on a lot of people.

5.  Do you remember flying toasters?  It was a screen saver from my teens, and I just thought of it today for the first time in forever. 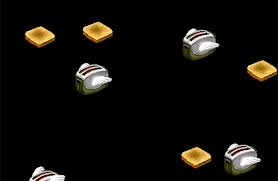 That was a great screen saver.  That was also nearly 30 years ago.  There are things that the youth of today never got to experience like my generation.  Some good, some bad.  But the flying toasters were a treat.

Christopher said…
I remember the first time I had gazpacho. I'd heard of cold soup but didn't realize it was what I'd been served when I dined with a family in Spain. But it was delightful. Congratulations on making stellar gazpacho--I think the cold intensifies the flavors which makes it tricky.
Also I loved Feud, but then I also loved Whatever Happened To Baby Jane.
And I remember those flying toasters. I had an Intellivision game console. There was a Space Invaders-type game, only with better graphics, and there was one group of spaceships my friends and I called "toaster factory rejects". Probably unrelated but the flying toasters always made me think of those.
Sorry to hear about your colleague's departure. Those can be tough. I also just learned someone I work with is going to telecommute permanently. From Cleveland.
July 14, 2022 at 5:44 PM