I've been reading a lot about the new "Coastal Grandmother" style trend, and decided to write about it.  This is another in a series of "McSweeney's Said: Pass".

Coastal Grandmother – This wardrobe is the essence of old money, pulled together in shades of sand, sea glass, and sky.  Crisp cottons and linens for a cozy, elegant look. Clean lines, timeless silhouettes. It looks plain, but is very, very expensive. Not practical for leaving home in. Style icons:  Diane Keaton, Blythe Danner, Martha Stewart.

Pacific Northwest Mimi – Anything goes here!  The only thing wilder than her hair is her multi-print peasant skirts and patchwork shopping bags.  All of her jewelry makes noise.  She smells like patchouli and ethically grown coffee.  She has edibles, but she isn't sharing.  Style icons include Carol Kane, Lily Tomlin, Mrs. Frizzle.

Food Network Grammy – Despite the name, this style works well on most people, as it has very few sartorial elements.  It does not evoke a location, but rather an air of competence and hospitality.  Button-down top in a solid color, tailored pants, architectural coiffure. Typically tan, and often holding a cocktail. Smells like vanilla or pot roast. Style icons:  Ina Garten, Paula Deen, Guy Fieri.

New England Grandmere – A walking LL Bean catalog.  This woman can rock a crew neck sweater 365 days a year without breaking a sweat.  She wears dungarees or trousers, and never met flannel she didn’t like.  The word you’d use for this look is “handsome”.  Probably has a throw pillow with a moose on it, definitely picks her own blueberries.  Style icons are Katharine Hepburn, Mercedes McCambridge, and The Brawny Paper towel guy.

Middle America Meemaw – This is a woman who wears slacks.  And those slacks better be wash and wear with an elastic waistband.   Clothing is functional, but that doesn’t mean it can’t be whimsical, too! She loves a good sweatshirt with kittens on it – if it has a polo collar sewn in, even better!  Meemaws wish they made more denim jumpers.  She doesn’t own purses or handbags.  She carries a pocketbook.  Style icons:  Vera Bradley, June Squibb, Michelle Duggar.

Continental Comfort Gam-Gam – This is the woman at the airport wearing a jogging suit with knee-hi stockings and dress flats.  Easy, but with a touch of elegance! This esthetic isn’t so much about what you wear, but about your attitude wearing it. Loves a good monogram. Won't go out if her hair isn’t done up.  You won’t see her without lipstick, or in white shoes after labor day.  Style icons: Dixie Carter, Queen Elizabeth.

Blue State Baba – Unapologetic. She wears protest t-shirts with designer jeans and expensive sandals made to look earthy. Loves some upscale loungewear. This woman has a whole second wardrobe for her black-tie activist events, but that’s not really who she is. Smells like tech start-up money. Has been to Wyoming. Receives a CSA share, and juices most of it. Style icons include Jane Fonda,  Carole King.

Ubiquitous US Grandma – She only wears clothes with labels – the ones with her name on them, sewn in as requested by the assisted living facility.  Hair often has a flat spot from extended periods of rest.  Housecoats, sweatpants and cardigans are central to this style.  Pockets for cough drops and hard candy, sleeves for staying warm and concealing a Kleenex.  Color palette is similar to that of Coastal Grandmother, but more muted, food-stained, and in synthetic fabrics.  Always smells like vegetable medley. Even if you aren’t onboard with this trend now, it’s coming for you.   Style Icons:  Maternal Grandmother Clara, Paternal Grandmother Faye, Great Aunt Sylvia. 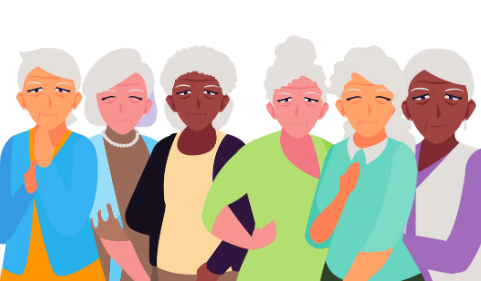 Christopher said…
I'm not sure why they passed on this one because I was laughing all through it, but, hey, a friend of mine who's worked as an editor told me recently, "Sometimes I had to pass on things I liked but there were issues of space or timing or other factors."
Also Mrs. Roper was awesome. I love seeing her grouped with Peg Bundy and Sofia Vergara. Let's face it. Stanley didn't deserve her.
June 6, 2022 at 4:35 PM