Last week, I attended a quick webinar on "getting unstuck".  It was a basic intro to cognitive behavioral therapy, and I enjoyed it pretty well.  I have to laugh, because when I started therapy maybe seven years ago, I wanted to get in and out fast.  Deal with my grief, fix it, and move on.

Seven years later, and while I do believe the grief is manageable, I still try to get in 2 times a month for general maintenance.  And, honestly, to pick apart some still-tangled knots.

But it was a good session to remind myself of what I want to get unstuck from, which is overextending myself and getting run-down because of it.  It's a pattern I'm constantly trying to rip up and never sew again.

Meanwhile, in another sense of the work, I got stuck over the weekend.  I went to the Red Cross for a bloodletting, and the young woman who did my jab wasn't overly confident with my veins.  I told her not to worry, that I wasn't going to freak out or cry on her.  She ended up getting help, and while it wasn't too painful, it's not that pretty, now. 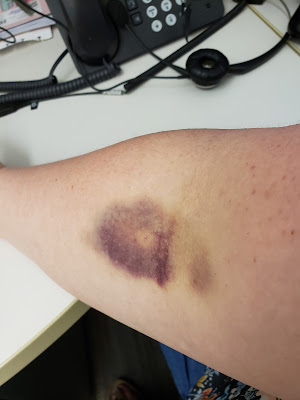 Given the solitary nature of my life, and the fact that people aren't as observational as you would expect, nobody seems to have noticed.

On Sunday, I stuck some strawberries, pectin, and sugar into a pot, then cooked and canned the result.  Some of the molten strawberry sugar goo splattered and caught a spot on my hand - it stuck, I had to rinse it off and it was a little burned.  Minor.  I'm always glad when I get a burn that hurts a little because I know the nerves weren't damaged.

The jelly turned out great, in my opinion.  I gave some to a friend to try, so we'll see.  I've had it a few times, and I am in love.  I used a lower sugar recipe.  It still calls for a lot of sugar, but less than usual, and so it's slightly tart and the color of rubies, and berrylicious. 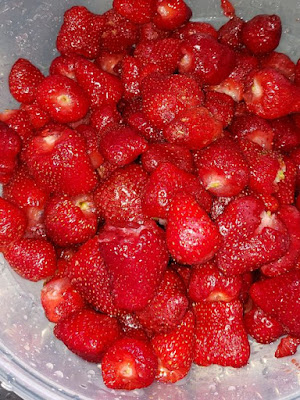 Matt gave the dog her summer cut over the weekend, and while we're not a family of professional groomers, at least old girl has a little sporty coat for the longer haul.  It makes me wish I could divest of a few pounds of my head pelt.  But I don't have a pretty skull, and I have reasonably pretty hair.  Who are we kidding - my hair is amazing, and I have plenty of it!

Christopher said…
Getting sticky seems to be a theme for you. Well, there are worse things than sticky jelly, and it does look incredibly delicious. Also kudos on giving blood. Here's a completely tangential story: there used to be a newspaper columnist and cartoonist in St. Petersburg, Fl. (where my parents have a house) named Don Addis. He wrote that he went to give blood in the summer and the place was nearly empty. He asked a nurse and she said, "We hardly get any donors when the Canadians leave." He then added a special thank you to the snowbirds.
May 18, 2022 at 3:43 PM