Do you ever feel so overwhelmed by the bigger issue that you focus on something smaller to feel like you're at least doing something?

Here are two examples - both dealing with body image, so, you know - if that triggers you, skip this post.

1.  My arms.  My arms are big.  They just are.  When I first put on weight in college, my arms got what I like to describe as "hammy".  They tend to look best in 3/4 sleeves or longer, and not just because they're hammy, but because I have keratosis pilaris (KP) - ingrown hair follicles that manifest as purplish bumps - so, over all, large, porcine, speckled arms.   In fact, when I was getting married, my father - MY FATHER, y'all - the man I miss every day of my life - suggested I try a dress with sleeves because, well, my arms.  For his benefit, I tried a dress he picked and it looked ridonk.  Big poofy sleeves, made me look like a linebacker.  Even Dad had to agree the dress I had selected was the right dress.  But he did suggest I do some weights or toning or something.  I didn't, and my arms were FINE. I don't look cut and sculpted like First Lady Extreme, Michelle Obama, but that's fine.  I'm me.

Now, in the winter, keeping things under wraps isn't a problem, but I used a gift card right at the first of the year to buy a lotion that is supposed to eliminate the KP.  I use it pretty regularly, though, I fall on and off that wagon from time to time.  But the bigger problem is, I need to lose weight, and start toning my arms.  Last night, my husband suggested doing  some weights for my arms.  He may have used the word "hammy" in the conversation.  And I know he's right, but there's this whole thing of, "I can talk about myself like that - you can't though".  It's like my family - I can bad-mouth them, but I double dog dare you to do the same.  That's a sidebar for another day.

But instead of using my time this winter with hand weights, or cardio, or anything useful, I exfoliated.  And not that I didn't need exfoliating, but it's sort of like watering your plants while the house is on fire.

I am focusing on the micro instead of the macro.

Exhibit B:  Whack-A-Mole.  I have a mole on my belly.  And yes, I have a sizeable belly. Because when you get fat, it lands there.  The mole has been there for years, and over the past five years, it has gotten bigger.  The dermatologist wasn't concerned by it, so I let it be - but I've been obsessing over it.  So I bought a DIY removal kit and have been working away at it for four or five days.  I believe I am shrinking and flattening it, and that's really all I can ask, you know.  I mean, there's only so much home surgery will get you. 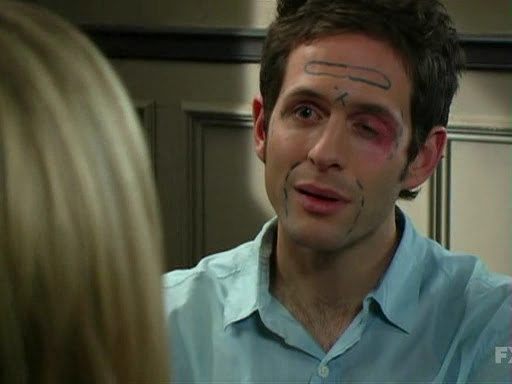 But why am I focused on the mole?  The mole is the least problematic thing about my belly.  But because that seems so daunting, I attack the mole.   Even though I have insurance and and dermatologist who would burn that sucker off in no time.  The mole, that is.

In theory I could get surgery to fix the belly - a bypass or sleeve or whatever the one that is least likely to kill you is these days.  And that would be a short cut - but it doesn't really get to the root cause, which is that I use food like a street drug.

Anyway, because I am nothing if not stubborn, I bought some resistance bands, I am going to deglaze my ham arms... or, at least, I own the bands.  Even if I never use them, I get partial credit for buying them... right?

Clearly, I have issues.