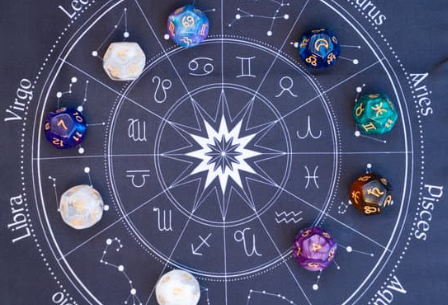 Aquarius – That will be the last time you mistake chlorophyll and chloroform.  It’s a rookie mistake.  Tangentially, your garden has never looked better – make friends by sharing your surplus cucumbers, but hang on to the one that looks like Taylor Swift – there’s money in celebrity veggies.  Avoid bowling and blow-outs toward the end of the month.  With your moon in Mars, you’re asking for nothing but gutter balls and frizz.

Pisces – Take advice from television theme songs of the 80s. “Just when you think you’re all by yourself, you’re not”. “Making your way in the world today takes everything you’ve got”.  Great lyrics, great advice.  Know that you are unique, just like everyone else, and that gives you license to move freely about the planet being you.  But the DMV gives you the license to drive there.  A mysterious stranger becomes a banal friend on or around the middle of the month.

Aries -  Your family of origin is in a cage match with your family of creation.  It doesn’t have to be that way, and you don’t have to take sides.  You are worthy of love from any source willing to provide it.  Sometimes, you even have to pay for it (nail techs, hairstylists, etc.).   Fill your space with things that make you happy, but don’t break the bank doing it.  A green plant may not make you as happy as a 15 carat diamond, but one of them will set you back $10, and the other…won’t

Taurus – It may be that the magic that has worked for you in the past is no longer working.  It’s not a sign that you’ve lost your magic, only that you’ve leveled up, and need to execute a higher degree of difficulty.   Hydration will be key for you in the coming days.   Actually, there won’t be a time where it’s not important.  Drink water, but make room for the occasional pitcher of Mimosas (shared with friends, please).  The barriers holding you back will be removed later this month.  The DOT needs them for a new project.

Gemini – You’re totally over being told you “look tired”.  You are tired.  So, yeah.  While you’re doing a lot of running around, it’s kind of like a hamster on a wheel – lots of effort, no progress.  That would make anyone “look tired”.  Hop off the wheel for a while, get some fresh air, and take a nap.   The color purple will hold special significance to you around the ninth.  The Color Purple is a great movie and could use re-watching.  Get the Kleenex.

Cancer – You kind of want to write a tell-all confessional novel about your time in college.  Though truthfully, you recognize that it would mostly consist of anecdotes about ordering Gumby’s pizza with extra Pokey Stix once a week, and that crush you had on the person in your Econ class who then tried to recruit you into their weird, cult-like religion.   Not to say it wouldn’t be a fun read, but take it as a sign to go out and have some extra adventures, then reconsider your writing career.

Leo -  Don’t answer that call.  It’s not that it’s not important.  You’re also important, and right now, you need to reserve your energy for texting. Communication in general takes center-stage this month, consider what you say, how you say, and how you look while you say it.  This is not the time to experiment with getting bangs.  Seek out people who enrich you spiritually and/or financially.  Take care of lawn-mowing in the later part of the day, and commit to lunch at the mall’s Food Court with a friend.  Get an Orange Julius.

Virgo – Ignore the urge to listen to Bootylicious on repeat for several hours.  There are better ways to kill time and brain cells.  Three times is plenty, then get out there and take on the world.  Or if not the world, at least the power company.  They overcharged you.  Again.  If you are considering a new job, remember that the devil you know is better than the devil you don’t know.  But unless you’re specifically working with Satanists, maybe find a job without so many devils.

Libra – Do you ever feel like you’re being filmed for some sort of hidden camera show?  Anything is possible, so make sure you’re looking your best when you leave the house.   Love is headed your way in the coming months.  Remember that love takes many forms, and that there is no shame in falling for a turtle.  It’s a tale as old as time.  Just take things slow.  Heh.  That’s a turtle joke.  Why aren’t you laughing?  You should smile more. You’re so pretty when you smile.

Scorpio – A penchant for puzzles?  Not surprising since your mind is constantly trying to solve…something.  Like why you can’t seem to get your laundry under control, or how can you make the people in your life see that they have more commonalities than differences?  The answers are that you need better storage, and you can’t.  By comparison, 8 Down, a six letter Yiddish word for juicy is a breeze.  It’s zaftig.  Step back to see that some puzzles in life solve themselves.  Buy something nice for someone else, just because. It will come back to you 1.3-fold.

Sagittarius – Pop goes the Weasel.  In this scenario, "the weasel" is your composure.  Don’t hold everything in.  It makes your stomach hurt and your hair fall out.  So unless achy and bald was the look you’re going for, let it out.  If you’re offered a last-minute invitation, take it.  Unless the envelope is addressed to your roommate and written in blood.  Sit that one out.  You may be looking for a new roommate soon.  It pays to be picky, and asking for references isn’t a crime, no matter what they tell you.

Capricorn  - You wonder if people you think of are thinking of you.  It would be nice if, like in LinkedIn, you got a notification every time someone checked your profile, you got a text when someone thinks of you. It totally doesn’t work that way.  Either that, or nobody has been thinking of you.   That seems unlikely.  You light up every room you enter, mostly because of your penchant for glow sticks and neon.  This is a time of rest and calm for you.  Use your mood to be restful to those around you.  You have no idea how helpful you can be.

Christopher said…
In spite of being a Sagittarius I often feel like a Leo. The two signs are six months apart which I've been told makes us compatible if not interchangeable. I was also born at the very end of the Sagittarian cycle, though, which may explain my penchant for neon and glow sticks.
Maybe all this explains why Gary Portnoy wrote the soundtrack of my life.
May 27, 2022 at 8:56 AM

j8kivl00pm said…
When machining starts, the cutting tool makes contact with the workpiece, cutting away layers of material. The tool and/or workpiece is moved and/or rapidly rotated mens travel underware in accordance with the G-Code directions so that cuts are made in precisely the proper locations till the half is completed. The vary of affordable steel alloys and plastics mixed with the speed of our expert machinists makes our on-line CNC machining providers a great possibility for prototyping. Because CNC machining can cut a high variety of absolutely dense, durable materials like aluminum 5052 and stainless-steel, it's perfect for creating fixtures or molds. We can source further CNC plastics from inside our community of 5,000 machine outlets. If you do not see the fabric inventory you are be} on the lookout for, please choose "Custom" under the fabric drop-down within the Xometry Instant Quoting Engine℠.
January 23, 2023 at 2:59 PM