on April 28, 2022
There's a movie from my early teens that I loved, even though I was probably not the target audience at the time.
Parenthood - 1989.  Huge ensemble cast of some greats - Jason Robards, Steve Martin, Mary Steenburgen, Rick Moranis, Dianne Wiest, Keanu Reeves, Martha Plimpton, Tom Hulce, and...Joaquin Phoenix?!? I had no idea that the adult video loving pre-teen, Garry, was played by a future star as big as any of the other people I just listed.
It's a sweet movie.  It runs the entire spectrum of emotions, and while I haven't seen it in ages, it's still one of those that is in my brain.
I have been thinking about it a lot recently, because of a scene at the very start of the film.  Gil, played as an adult Steve Martin, is thinking back to baseball games he attended with his absentee father.  This is the dialogue from that scene: 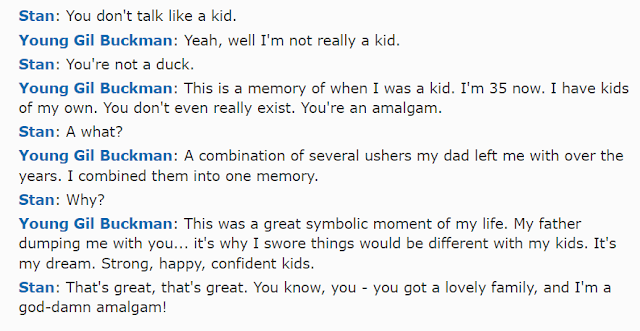 It's the concept of the amalgam that I have been thinking about.  Quite often, I find myself meeting someone and thinking of a "box" they belong in with other people who remind me of them.
Here's the best example I can give you.  My therapist reminds me a great deal of the father of one of my friends - physically similar, similar outlook - just a specific type.  There's a commercial airing that features another person of that type that would go in the box.
I have dozens of these "types" that I often sift people into as a shorthand for that kind of person.
I wonder if that's normal.
My feeling is, if it made it into a Ron Howard movie, it has to be kind of normal, right?
Anyway, that's what I've been thinking about a lot recently.  The whole Joaquin Phoenix thing just derailed me, though.
ae

Christopher said…
I saw Parenthood in the theater as a kind of free double feature. A friend who worked there let me in to see Young Einstein and even though it was free I wanted that hour and a half of my life back. But I stuck around and watched Parenthood so it all worked out. Which is kind of the theme of the movie: things will work out.
But, yeah, I think sifting others into types is something we all do.
April 29, 2022 at 3:01 PM