Welcome to April.  We survived March, and it was, as the name would indicate, a bit of a slog.  But I'm here, I've had a pedicure and unearthed my favorite Birkenstocks, so let's get this party started.

Lots going on here.  Saw Mom and my sister  at the end of March - good to see both of them, but it was jam-packed with things to do, places to go, and people to see.  I came home tired.

Work - well, they're making some staffing changes, and while I'm not negatively impacted, there are still changes.  They've got me working on a member retention initiative, which is exciting, and a little scary.  I still marvel that people think I'm capable of being responsible - I mean, I mostly am - but I still think of myself as a goofy kid.  Granted, now old and graying - but still goofy.

We made a quick day trip to see my husband's family last Saturday.  The visit was well worth doing, but I hate that Matt had to make the drive - because it was fraught.  For me, it was the same route I had finished just days before, so the deja vu was strong.

You can pack a lot into a week, as it happens. Even more into two weeks.

But anyway, that's why I've been notably (or not) absent in the blogosphere of late.

Also, I got a haircut, which is awesome, and watched Judd Apatow's "The Bubble" which was not.

Now, I did think his daughter is a solid little actress, provided she was not playing herself, and I don't know... she might have been.  But that's neither here nor there.

Now that we're easing into the weekend, I'm ready to take it easy.  Except that I can't because, well - laundry, cleaning, groceries, laundry, dog hair.  I should also exfoliate.  The good news is -it should be warm enough over the weekend to open some windows and de-funk the place a little.  The winter makes things a little stale inside.  I also really need to wash some windows, but that's fun for another day, probably.  I also need to scrub and polish the kitchen floor.

I used to think that being a grown-up was all about getting to eat cookie dough whenever I wanted.  No so much, as it happens.  More is the pity.

And honestly, that's all I have.  Please enjoy this picture of my dog that my husband sent me while I was in Atlanta: 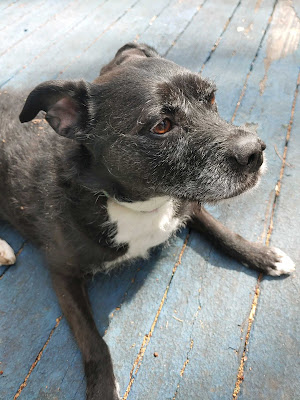 She's glad I'm home.  And staying there for while.  So am I.

Christopher said…
Dog pictures are always enjoyed. It's also amazing how much you can pack into a weekend, speaking of laundry, cleaning, groceries, etc. And yet one of the downsides of adulthood is how quickly time flies even when you're not having fun.
I hope you have time to eat some cookie dough and get some de-funking done before we get another round of frost. Ah, spring in Nashville...
April 9, 2022 at 4:35 PM