on March 17, 2022
Back in the day, Sanford and Son aired on Channel 17 in Atlanta quite frequently.  Channel 17, WTBS, Turner Broadcasting Systems, became The Superstation back before that was a thing.  If you wanted to watch a Braves game, or any of a number of sitcoms, or an old movie, Channel 17 was for you.  Leave it to Beaver, The Addams Family, I Dream of Jeannie, Bewitched, The Carol Burnett Show, The Brady Bunch Mary Tyler Moore, Bob Newhart.  And of course, Sanford and Son.  The shows always aired at :05 or :35, which was brilliant.
But I mention Sanford and Son because of Fred's line to Aunt Esther, "Go stick your face in dough and make gorilla cookies."
Possibly one of the best insults of the day.
I thought of it first because of the cookies, but the Aunt Esther tie-in makes it too good to leave out.
So, today is Purim.  I learned of Purim in my youth, by reading the All of a Kind series of books.
Written by Sydney Taylor, these semi-autobiographical books tell the story of five sisters and a brother growing up in the early 1900s in New York City.  Father has business doing some kind of trade - it's not clear, but maybe warehousing goods for retailers?  His wife runs their house and raises the kids.
Ella is the oldest.  She's probably 13 in the earliest books, and 18 by the end of things.  Then there's Henny (Henrietta), age 11.  Then Sarah, age 9, Charlotte, 7, Gertie, 5  - and baby Charlie.
The girls get the most attention in the book.  Ella is petite with dark hair and has a flair for acting and singing,  Henny is a curly blonde who is a bit of a comedian, Sarah is blonde, quiet and studious.  The younger girls are both sweet, imaginative, and not as fleshed out as their older sisters, but seem to be, like the older kids, good girls.  They all go to the school, go to the library, help out around the house, go to temple, and mind their elders.
And in the plots of these books, you learn about Jewish traditions and holidays.  Sukkot, Yom Kippur, Passover, Rosh Hashanah, May Day, Jewish Weddings, Hanukkah, and one of my favorites - Purim.  The story about their Purim is that Ella wants to play the Queen, Esther in her community's Purim play.  She is instead given the role of the Jester and is bitterly disappointed - but it turns out to be a much better role, and along the way, we learn about what Purim is and why they celebrate it.
Like many things in life, it's complicated.
King Xerxes of Persia is throwing a party and asks his Queen, Vashti to come and dance for the important men.  You get the feeling that dance is a euphemism that covers whatever entertainment they might request, and Vashti says no.  The King is mad, obviously, and his council tells him he needs to dismiss her and find a new queen.
Sidebar here for a second.  Good for Vashti.  I know Bible puts it out there like she was disobedient and she's the villain, but shame on Xerx for using his power to exploit his wife.  I mean, sure, it's good in a marriage to cooperate, but not at the risk of losing your own standards.
So Xerx has them gather up all the hotties in the land and brings them to his palace.  There, they are all fattened up, given massages, bathed with the best smelling things available in that era, and paraded before Xerx for him to pick out a new Mrs. Xerx/Queen.
Xerxes falls head over heels for Esther, whose Hebrew name is Hadassah (Myrtle Tree).  She is probably about 14, but it was a long time ago, so she was basically middle-aged.
He takes her as his Queen, not knowing she's Jewish.
So they're living large, and his advisor Haman comes to him and tells Xerx he needs to kill off some Jews.  At the behest of her cousin Mordecai, she goes to her husband and makes the case for not killing off her people, so he doesn't, and they rule Persia together, happily ever after.  Or, til she dies at age 28, at least.
This story gets read in its entirety at Purim, where it is known as the Megillah, hence the phrase, "the whole megillah".
And Jews celebrate with triangular shaped cookies filled with jam or poppyseed filling.  The story is that either Haman's ears were triangular (gross) or that he wore a three cornered hat.  But the other day, I read that more likely, they were originally called "mohn taschen" for poppy pockets, and were a symbol of feritility - given that they look like, well... vaginas, honestly. 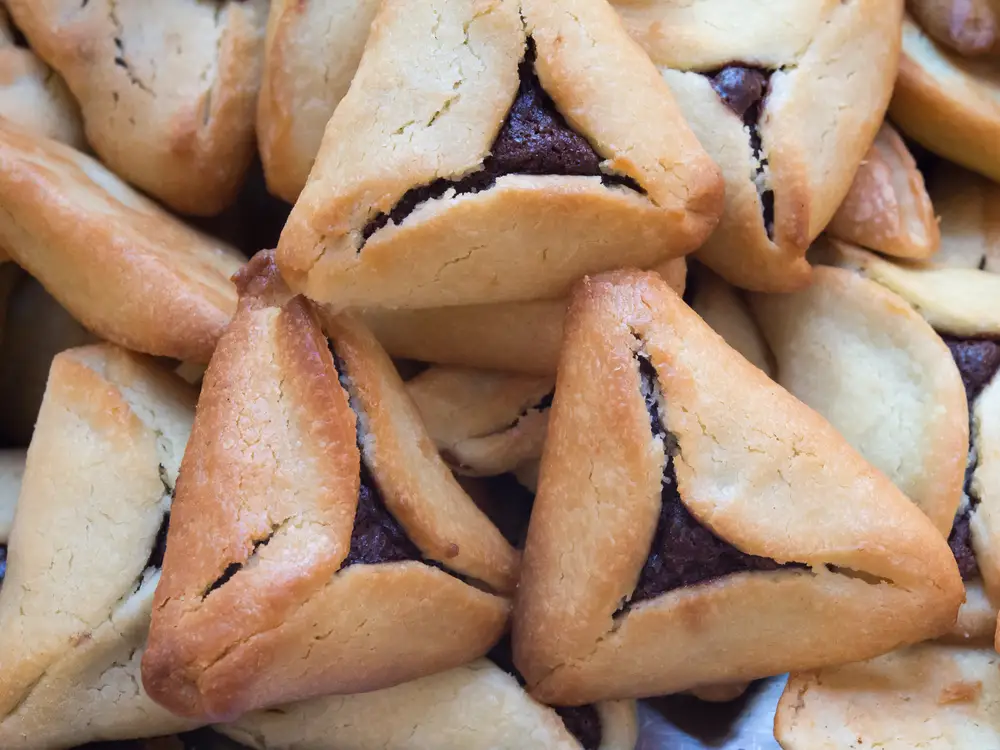 There's an online article that explains it all, here:
https://www.heyalma.com/yes-theres-a-reason-hamantaschen-look-like-vaginas/
But you do you.  If today is green beer and corned beef, rock on.  If you're watching hoops and eating hot wings, congrats.
Just know that those cookies are amazing, and so was Esther.  And honestly, so was Vashti... probably.
Haman was a dick - that's indisputable,
ae

Christopher said…
Purim really is fascinating. Well, all the Jewish holidays are fascinating to me and I wish I'd read the All Of A Kind books and known more than just that Hanukkah was celebrated around Christmas when I met a rabbi as part of a Boy Scout project when I was sixteen. But it was a chance to learn.
Also I know things probably didn't end well for Vashti but I hope she went on to live a happy life and maybe even find someone who treated her better.
But before I get to that I'm going down a Superstation rabbit hole. I remember watching Sanford & Son in the afternoons, but I think it was USA that ran the Laff-A-Lympics in the afternoons. Cable TV back in those days was weird and fun.
March 18, 2022 at 12:01 PM