Yesterday in our Monday meeting, our CEO told the entire company to give some space to a colleague whose parent is not expected to live much longer.  That undersells it.  He told us under no circumstances to contact her about work - to call him instead.  I have the most respect for him for this.

My boss did the same thing for me when Dad was dying.  I also wasn't checking email or answering work calls, but he was the bouncer for sure.  He also sent some really good food to the house.  What a mensch!

Losing a parent, especially for those of us who are devoted to our families (like my colleague, like me) is basically joining a really shitty club that you can't unjoin.  The club offers no real benefits.

We're creeping up on the anniversary date, and I spent the weekend in Atlanta where, let's face it, I was surrounded by the fact that my father is gone.

I'm also about to make a change, in re: things from my father's life.  I have these curtains in the kitchen, and Matt has mentioned several times now that he doesn't really like them, but since it makes me happy... I made them from my father's neckties.  The fact is, while I do need kitchen curtains, it would be better to have some that are generally well-liked, and I'd like the ties to serve a new purpose.  I'm going to turn them into a wrap to wear out with a nice dress to theatre, or concerts or whatever.  Here is what I have in mind, as visualized in this Canva rendering.  Not to scale - but you get the idea. 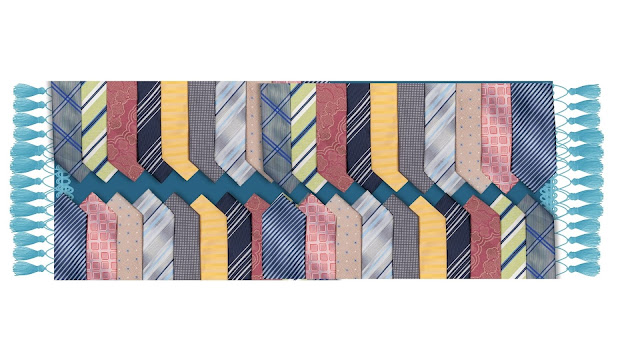 I think it makes sense.

I also need to find the new curtains.  I know what I want - I think, but it may not exist.  More is the pity.

But that seems like a good start for using the ties in a way that is more personal and may allow them a longer lifespan.

Enough on that, though.

As you may know, I tend to have what I can only describe as micro-obsessions.  One of my current ones is the Disney movie, Encanto - or, more accurately, the music from Encanto.

I still want to actually see the movie.

But you know, we'll get there.

Christopher said…
That wrap really is a wonderful idea, on many levels. I like the idea of the ties as curtains, but a wrap seems like upcycling, and it's rare that any item of clothing gets not just one but two new lives. Funny thing--someone else just shared this with me:
https://www.theguardian.com/lifeandstyle/2022/feb/26/sewing-and-making-clothes-can-inspire-heal-or-bind-us-to-the-past
Also congratulations on the COTW.
February 26, 2022 at 2:48 PM