Today is Piper's 7th anniversary of being officially ours.  She's pretty darn amazing, even though she's the worst.  She hates most people, except:

- Anyone at the vet

- Anyone at the kennel

- Anyone at the DIY dog washing place, Wags & Whiskers

- Me and my husband

I get it - some days I'm pretty fed up with mankind. Especially when they're acting man-not-so-kind.

That said, things here are good.  We are moving in our offices from the south wing to the north wing, and I am firmly ensconced in my new cube.

Actually, let me pat my own back - I moved my own desk over.  I can schlep just as well as anyone, and it's my stuff - so, I did.  And OK - the IT guys had to hardwire me in, but the facility dudes were super happy with me.

This princess rescues herself.  I can open my own jars, kill my own spiders, and change my own tires.  So no, if I can get things set up without help, I'm going to.

If I can give you any life advice... be nice to people who have the hard jobs, because they deserve it.

And rescue a dog from your local Humane or Animal Rescue group - because they deserve it, too. 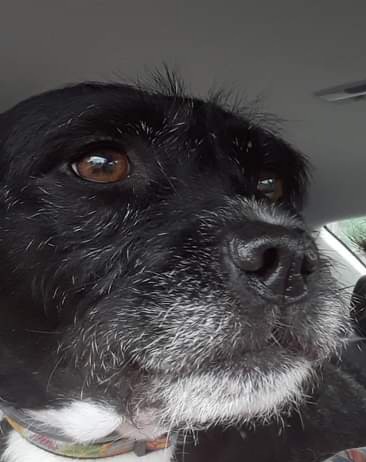 The asshole dogs need it the most.  Trust me.  She looks like a sweetheart.  She is the WORST*.

*But I wouldn't trade her for anything.  Ever.

Christopher said…
Since the Chines New Year just passed a few days ago that reminded me that, on the Chinese Zodiac, I'm a Dog, and one of a Dog's qualities is loyalty. If I met Piper I'd keep my distance and I'd expect her to be terrible, and that's okay. Our oldest dog has never met a stranger, our youngest has to get to know people before she warms up to them, and our middle kid is, well, kind of funny--he either takes to someone or he doesn't.
Every dog, especially the asshole dogs, just needs the right person.
February 3, 2022 at 3:27 PM