That Time I Met Jeff Garlin

So, comedian Jeff Garlin has been under scrutiny as of late for his behavior on the set of The Goldbergs, culminating with getting fired from said show.

Apparently, his brand of humor is too rough for the other members of the cast, and I can totally see that. 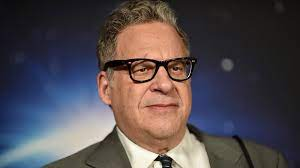 Here's a quote from his 2019 comedy special:

“A lot of days on ‘The Goldbergs,’ I sit in a Barcalounger in tighty whities for the whole day, and I think to myself, ‘Who did I blow to get this job?’” With a loud laugh, he added that every time he stands up from the Barcalounger, he always says the same joke on-set: “‘Ah, my vagina. Ah, achy vagina. Ah, my vagina’s killing me.’”

In the Netflix special, Garlin said that joke led to a HR complaint from an offended crew member. “I get called in, and they go, ‘Look, you can’t do this.’ And I go, ‘Oh yes, I can.’ They go, ‘You might get fired.’ I go, ‘I’d love to be fired and have it hit the papers: Cover of TMZ: ‘Jeff Garlin Fired Because His Vagina Hurts.’”

In an earlier comedy routine, he once said that women have a great excuse they never use which is, "My vagina hurts."  He says no one would question it and women could get out of whatever by using it.

As someone with a vagina, I happen to think that's funny.  Granted, I am not easily offended.

But this quote was taken out of a lengthy article in Vanity Fair, and it gets pretty deep.  There's a lot of the interviewer telling Jeff what she has heard and him defending himself.

I think probably he said some off the wall stuff, and people got offended.  I don't think he necessarily abused his power.  There's a lot of "he-said/she-said" - but nothing concrete.

Apparently, he also hugged people and it made them uncomfortable, and the interviewer says, repeatedly, that he's in a position of power so people feel they can't say anything.

And I kind of think that's BS.  I mean, granted, Hollywood has a set of rules I cannot pretend I understand - but I think the bigger point is that The Goldbergs has an HR department, and they need to deal with it.  If people don't go to HR, or don't tell Jeff, "Hey, don't hug me", or "don't say stuff like X"  how the hell does he know it's a problem?

So, with that said, I actually met Jeff Garlin once.

The Belcourt was having a screening of the movie Airplane! followed by a Q&A with the Zucker Brothers.  Pretty great, right?  Well, Jeff was the moderator for the Q&A, and for some reason, the crowd just hated him.  They were rude, rowdy - it was embarrassing.

After the event, I am walking to my car, and I see Jeff hanging out next to the back entrance of the theater, and I go over and I apologize for my fellow Nashvillians.  He said it was no big deal, they just didn't vibe with him, and he wasn't going to win them over, but it was all good.

He treated me like someone who understood comedy and audiences.  We hugged. I feel like he asked me first, or at least announced his intentions to hug me. I was fine with that, I'm a hugger.  I didn't feel assaulted or uncomfortable.  I also don't have to work with him, and he doesn't determine my fate in my career.  But my vibe was that he was a friendly guy who didn't have a predatory vibe at all.  And I'd like to think I'm a good judge of people, but it was five minutes of my life, six years ago.  So who knows.

I'm going to assume he didn't jive with the people he worked with.  You have to know where to draw a line, and if you don't, then hold off being your most authentic self.  That is my advice to the world at large.

And as someone who has been misquoted and misunderstood, and had to undergo scrutiny for that very thing, I tend to think that context is everything.  And if you're going to accuse someone of something, you need to be privy to what was said, and not just what you think you heard.

And to Jeff, I say - I thought you seemed like a good guy.  Please don't prove me wrong.