So, as it turns out, the blue lighted house is growing on me.  It's not subtle, but it does give sort of a nice cool glow as I pull up every night. 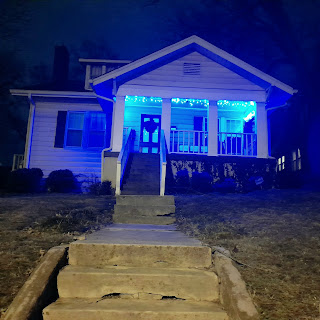 I've said before and will say again - it's no coincidence that the winter holidays all have an element of illumination - be it candles, lamps, string lights... we need that light.  And this time of year, it's scarce.  If you're reading this in the southern hemisphere, come back in six months - it'll be vaguely relevant, except for the part about holidays.

I had my labs done for my annual checkup, and my level of Vitamin D has slipped below the acceptable threshold, so it's time to take more of it.  I would argue a few days in Jamaica would probably set me right, but I don't have the time or money for that boondoggle.  So I'll just pop a few more Vitamins D each day.  They also want me to take Omega 3 Fish Oil, and I might pass on that.  I know my triglycerides should be lower, but really, I just need to lay off the sugar.  I have to go re-take the lab for my white blood cell count, because it's high.  This has happened before - and I think we're just looking at a sinus infection or some outlier weirdness.  My suspicion is, I'll retest and we'll be good to go.

My previous nurse practitioner left that practice to move to Jackson, TN with her husband, so I have been placed with a new one I like equally well.  I think I prefer PAs and NPs to MDs.  They tend to dig deeper.

We had a holiday potluck here at the office this week, and it was amazing.  It was so social and so wonderful.  Laughter really is the best medicine.

This year has basically flown by.  It's strange.  I hope that I have more people in my life in 2022.

I'm sure I'll post again before the end of the year.  Merry, merry!

Christopher said…
This year really is flying by. It seems like it's going even faster now that I'm trying to wrap things up before a well-deserved vacation. It won't be Jamaica, it won't even be out of Tennessee, but some time off to enjoy the lights is better than none.
Although the blue house does look a bit odd. Still I'd rather have a blue light than curse the darkness.
December 17, 2021 at 3:57 PM