When I first moved to Nashville, sixteen years ago, I tried to learn the city by forcing myself to find new routes to places I had to go - I would never come home from the store the same way I got there - even if it was just cutting over a few blocks, or picking the interstate vs. a surface street - I tried to find multiple ways to get where I was going.

That was a decent strategy, because I know Nashville reasonably well, now.  And I can even look back at places I struggled to find early on in my time here that are old hat, now.

That's not to say I don't occasionally mess up.  There's a bagel place, a new one, on 17th and Broadwayish, and I occasionally fall prey to the one-way street conundrum getting to and fro.  I definitely don't know East Nashville, but I am starting to learn where things are, in orientation to other things.

When we first moved to the new building, I struggled a little.  Honestly, I did pretty well up until then.  Once, while we were still in the Brentwood building, I overshot my exit like I was going to my previous job.  That it happened once is a miracle.  In the new building, there are three times that instead of taking the exit, I kept going like I was headed to the airport.  Old habits die hard, y'all.

But you have to keep reevaluating.  After the ban on coming into the office was lifted, I was back to my same route.

Over the last month or so, though, I've been noticing that "the usual" wasn't as great as I had remembered it.

Basically, there are two ways (via highway) that you can get to my office:  (A) up/down and over, or 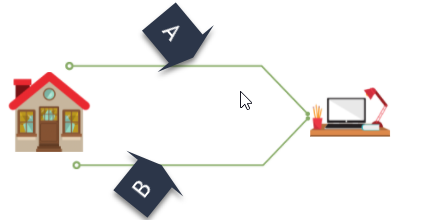 I'm not a cartographer, but you get the basic idea.  I have spent most of my time using route A, because it seemed like the most expedient.  But in order to do that, I was taking a left-hand turn to get on the interstate, and it was at an intersection where people would often block movement getting off the interstate.  They wouldn't want to wait for the next light, so they'd creep out into the middle and get stuck there, so that eventually, it would take me 2 lights to get through.  So, now I'm taking B.  And it may be a mile or two longer, but it is the road less traveled by, and I thoroughly enjoy it more.
It makes me wish there were a faster/easier/better/different way to get from Atlanta to Nashville.  I mean, there are a million ways to get there, but the most expeditious is the route I always take.  Maybe some day, once they perfect self driving cars, I can take a nap in Nashville and wake up in Atlanta.
Until then, I'll take the usual route.
Happy Thanksgiving to you and yours.  Safe travels and all that.
ae