My sister is one year, five months, and three days older than me.  Because of the timing of our birthdays, she was one of the younger people in her grade, I was one of the older people in mine, and we had a grade in between us, so that at least the teachers could get a breather between years of us.  That's a joke, honestly.  We were both pretty easy students.   Anyone but Mr. McFarland would agree, and he was a major douche who advised my sister not to go into nursing.  My mother, a nurse, came and verbally tore him a new one.  When he called my name in attendance that next year, he visibly winced.

But because we were so close in age, we had a lot of friend groups in common.  And from my standpoint, it didn't hurt that I auditioned in to the women's choral group, which had a lot of Juniors and Seniors in it.  And they all liked me and took me under their collective wing.

We grew up in a northern suburb of Atlanta, and our schools were, in my opinion, pretty good.  Many kids graduated and went straight to college - that was a matter of fact more than a surprise.  And in many cases, we had kids going to Duke, UNC, UVA.  Tons of Georgia Tech students. Hell, I had a friend a year younger who ended up at Harvard.  So, you know - some super high achievers.

In both of our graduating class, we had an abundance of lawyers, a few doctors, nurses galore.  One of my classmates is a successful artist living in New York.  One of my sister's classmates is also in New York and does stage work - lighting for the New York Ballet.  Businesses are being run by the people we grew up with.  There are educators from pre-K to post-doc, folks working for the State Department living in countries I couldn't find on a map (which says more about my map-reading, but whatever).  Now, nobody is famous - we have people who are, within their respective field, highly regarded and well known, but it's not like I can say, "Oh, I went to school with Neil Patrick Harris, let me tell you what he's really like!"

But I am enormously proud of the product of my High School alma mater. 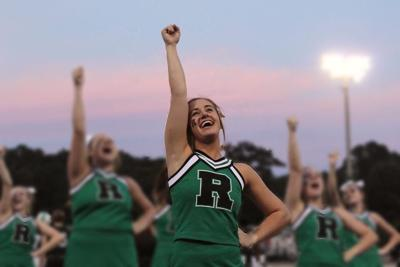 I was having the conversation with my sister, naming people from her class that I was really impressed with, and I could see I was losing her - so I started throwing out celebrities who were more or less our age, and making them our Roswell High School classmates.

"Remember that time that Brad Pitt streaked at the big game against Milton?"

You get the idea.  This is a running joke with us, where I'll tell her I ran into her old lab partner, Gwyneth Paltrow, and Gwynnie says hi.

Well, last night, we were talking because one of her classmates is running for city council in our hometown, and we think he has a decent chance of winning - for a lot of reasons - he owns a business there, has raised his three kids there,  he's well-known, very likeable, and is extremely active with the high school marching band.  He was behind a fundraising effort to get the band a dedicated trailer to take their gear to away games, competitions, etc.  That sounds pretty basic, but apparently, they were having to rent one every weekend in the fall.  And they're not cheap to buy, but he made it happen.  I should note, he was a marching band member back in the day.

I should also mention, he dated my sister.  They dated their senior year, and were a sweet couple.  They were smart and broke up before they went off to school - she went to College of Charleston, he went to Georgia State.   They both met their spouses in college.  His wife is apparently very nice - Laura met her at a reunion.  I know her through Facebook only, but I can attest that they are a cute couple with three handsome boys.

I told my sister that Mom had voted this week, and that both she and her boyfriend gave him their vote.  She asked if Dad would have voted for him, and I said definitely.

And then I said, but you know if, Vic Roberts (name changed for privacy) were running... Dad would be he campaign manager.

This requires some back story.

When my sister was in 3rd grade, my parents decided they were going to be her class' Room Parents.  Up until that point, it was a mother's only thing.  My father was the first Room Father at Roswell Elementary.  And he loved it, and kids loved him.  There were two boys in my sister's class, Vic and Harry (also not his real name), who my father took a little extra care with.  Both Vic and Harry were kids of single moms.  Dad would try and devote a little extra attention to both of the boys, and would slip a pack of baseball cards in their goody bags in classroom parties, that kind of thing.

Both of them remembered my father beyond 3rd grade.  If they saw him out and about in town, they would say hello to him, comment that he was Laura's dad, that kind of thing.  They both ended up staying in our home town, both got jobs working for the city, and even into adulthood, "Hey, Laura's daddy!"

My father got drafted into playing Santa that year for a school play.  He had to perform for every grade, so he drove back and forth for his events in a plastic Santa suit.  Apparently the Santa suit budget didn't get approved.

Anyway, we decided that Dad would have started a write-in campagin for Vic, and that it would have been amazing.

Like that time Christina Applegate won Homecoming Queen, but gave her crown to Jennifer Garner, because she thought Jennifer deserved it more.