I'm feeling a little off-kilter these past few weeks.  I'm sure my deplorable eating has something to do with it - I'm also not sleeping well - my body is ready to fall back an hour, I guess.

But on that note - Georgia has decided to stay on the same clock year-round - no more Springing Forward or Falling Back.  That means that half the year, they'll be an hour ahead of us, and the other half, two hours.  Which is fine, but annoying for purposes of calling my mother, or her calling me.  Or Atlanta doctors appointments.  Can't we all just get along?  Can't we, as a nation, decide to either all do it or none of us do it?

No - because we're all so unique and special.

I've been listening to NPR all week during my commute.  I feel like that's a better use of my brain than surfing for one or two good songs before I get to work.  I can't say it helped me in the weekly news quiz I take on Fridays, but at least I am a little better informed.  For example, I know there was a political coup this week in Guinea.

Although, to be honest, it just made me want to look at guinea pigs.

When I was sixteen, I had to take a driver's ed class.  I was about to turn 17, and my parents were forcing me to get it together and get my license.  I did not much like the instructor, I remember that.  In my mind, she and my piano teacher are lumped together.  Imagine late 50s, early 60s but looks older, smells like cigarette smoke, and has no personality.  Short hair that is the color of iced tea cut with mud.  No fashion sense.

Anyway, the highlight of the whole thing is that the class was held at a mall.  And on our lunch break, I would head to the pet store.  I didn't know any of the other kids in the class, and I wasn't looking to make lifelong friends.  So I'd go have a gander at the pet store.  The most remarkable thing there was a very pregnant guinea pig.  I hoped that in the week I was coming to the mall on the daily, she'd give birth and I'd get to see her piglets.  I would spend most of the break in there, with just a few minutes to knock back my sack lunch.  Admittedly, I was weird.  I still am.

She was one of those rough-coated fluffballs who looked as though she had stuck her little paw in a light socket.  Sadly, she did not give birth on my watch.  A guinea pig needs her privacy.

While searching for that image, I went down a bit of a rabbit hole.  Did you know there are hairless guinea pigs?  I did not. 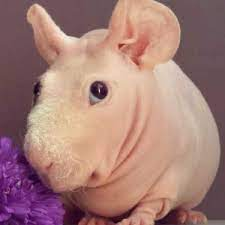 This is Ludwik.  Apparently, he has his own Instagram.  Well, of course he does.  He looks to me like a little albino hippopotamus.

Anyway, after a week at the mall, I passed the classroom portion of driver's ed, did my roadwork, and finally got my license about two months before my seventeenth birthday.  I was a terrible driver for a while, but eventually got it together and now, well, it depends on who you ask... I'm not terrible, in my opinion.

Anyway, I do think NPR makes me a little more informed.  I now also want to start a guinea pig ranch.  Piper would think they're prey, though. She thinks everything is prey.

I have a pretty solid hunch that the office days will end sooner rather than later.  On any given day, I'm one of maybe two or three people in office, and on a few occasions, I've been the one person there.  It's not sustainable.  So I'll enjoy the peace and quiet, and we'll see what happens.  I have an idea about a space I could set up - we'll have to see if I can make it work.

Last night I dreamed I had hair growing out of my mouth - it was definitely my hair - same color, texture.  It was lodged in my teeth, and we cut it free, then had to determine whether my hair was just so long that some of it got stuck in my mouth, or whether I was actually sprouting hair.  The dream dictionaries range in interpretation from hot sensuality to loss of income.  Who knows?  Good news is, I am awake, and there is no hair growing out of my mouth.

Meanwhile, things in Atlanta seem to be holding stable.  My sister will go visit next week, at which time I am sure I'll get some instructions on what we need to do.  But as it is, I'm pretty pumped to have a few weekends here.

What I'll do with those weekends remains to be seen.  But that's the fun part of being a grownup.  I get to choose.  Within some reason.  I mean, I can't go to Mexico and blackout from a tequila bender.

But I could catch up on Ted Lasso, meet a friend for dinner...

It's the little things that can put you back on track.

Christopher said…
I never knew guinea pigs did anything other than occasionally walk from one end of their enclosure to the other and shriek until a few years ago when I learned about "popcorning". Now I could watch them do that all day.
I'm also kind of sorry you missed the birth of the piglets and also not sorry. I had a hamster when I was a kid. I'd only had her a couple of days when I picked her up and there were a bunch of babies underneath her because she'd just given birth. That was a strange experience and also taught me that some pet stores are irresponsible. Or at least not too concerned about things like that.
September 13, 2021 at 11:40 AM