Well, hey there, everyone.  Can you believe it's September?  No?  Me either - it just feels like extra August to me.

I'm not going to get all into the rapid push to fall.  Just let it be said I am not a friend of all things pumpkin.  My mother used to make a pumpkin curry soup that, minus mushrooms, was delightful.  I can manage a slice of pumpkin pie at Thanksgiving (though it is for sure, my last preferred choice as these things go), but that's enough for me.  It's not like I drink tons of coffee, anyway, so the Pumpkin Spice Latte (and analogs) don't impede my ability to enjoy coffee, or not enjoy it.

Anyway, it's September, and we're closing in on the end of another year, which is bananas.  A guy on the radio today said it's 115 til Christmas, which is also bananas.

If I were a smart woman, I'd start shopping early.  But things can turn on a dime, and I don't mind being a little rushed in December.  I do my best impulse shopping then.

Speaking of, I bought myself a little something over the weekend and it arrived yesterday. 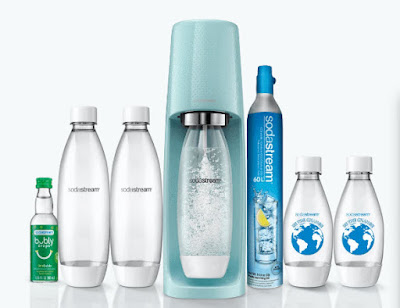 It was well past time to treat myself.    And I do love some fizzy water.  Moreover, I am very dissatisfied with the new formula put out in the name of Coke Zero.  It's too syrupy, and doesn't have enough of the bite I require in a diet soft drink.  And I know, I know I need to step away from the brown chemical water.  I do still love a Diet Dr. Pepper, but I'm going to try and drink water for a while and see how that does me.  Granted, I flavored my liter today with a splash of pineapple juice.  And I may do similar things going forward, but I argue 30 calories of juice spread out over a day is negligible, and surely better for you than aspartame.  I love aspartame, don't get me wrong.  I celebrate it.
I posted about my new toy on the FB, and turns out, SodaStream is a little something that seems to connect us to others in the carbonation nation.  Many of the cool kids have them.  Good for the cool kids.
I'm plugging along nicely, otherwise.  I should be able to spend all of September in Nashville, which is not a small thing.  I had to move a doctor appointment for my mother - the point of said appointment is to give her a month on a new prescription and the prescription finally arrived today.  Which is a long boring story that I'll keep to myself.
So, I moved my mother's appointment to early October.  It works out nicely as it coincides with going to the cabin for a work day.   It's not the only reason I did it, but it was certainly a factor.
The powers that be have decreed that return to work is still voluntary until November (not September as was originally determined).  I'll be stunned if it doesn't get pushed again.  I still plan to come in because it works for me.  Yesterday, because of inclement weather (thanks, Hurricane Ida), they had us work from home.  It was nice to not have to commute, put on nicer clothes, and pet on the dog, but honestly, I was glad to be back this morning.  It's just easier to work at a real desk with good lighting and no drifts of dog hair in the corner to distract.
That's all from me, I think.  I'll stay hydrated and effervescent - you do the same.
As always,
ae

Christopher said…
I thought there was a company that made fizzy water with some added fruit flavor--supposedly calorie-free but I don't see how that's possible. If you can make your own you're probably paying less and getting something you enjoy more, so it all works out.
September 3, 2021 at 2:27 PM