You Can Say That Again!

Things have been a  little  completely upended in my life these days.  Every time I think I have a plan nailed down, I am reminded that the best laid plans... well, you know.

Most recently, I've had to add some time to what was already going to be a longish trip to Atlanta.  My mother has to have some diagnostic tests done that will take about a half day - and it seems at best unkind to have her boyfriend shuttle her there and stick around for a long afternoon into evening.  So, I am heading down two days sooner than anticipated.

And it's fine, because it has to be.

But it's not really because I had everything so neatly and precisely planned.

It's kind of my own fault - she has to do a diagnostic test on Wednesday, and I assumed like most tests it would be quick and easy.  Wrong.  It's at least three hours, maybe four.  And that means we arrive at 2:15 and head home in rush hour.  Should be a walk in the park.

But we had to get it done because we meet Friday with her doctor to go over the results.

Yesterday, I was feeling especially inept and overwhelmed.  It didn't help that I managed to take down  a page of our Sharepoint site for about 30 minutes.  It was just one misstep after another - and that always eats at me.

But I was thinking this morning, as I often do, about one of the books of scripture I turn to in times of upheaval.

"And yea, verily, Anne spake,  "Marilla, isn't it nice to think that tomorrow is a new day with no mistakes in it yet?"

I started thinking about Anne (of Green Gables) and how she was thirteen when she landed with the Cuthberts.  Which, if you think about it, means that her formative years were kind of all over the place.  If you read the prequel, not written by L.M. Montgomery, you get a sense of what could have been her path to Green Gables.  I read it.  I didn't love it.  I didn't hate it, but I certainly don't consider it canon.

We can piece together, from some of what Anne says canonically, that she did a lot of housework and baby-minding prior to her arrival.  And that probably, her indomitable spirit did more harm than good.

But what's interesting is that in 13 years, no one managed to beat the joy out of her.  They weren't able to extinguish her light.  And that could have happened.  She could have ended up sullen and unhappy - but even when things are bleak for Anne, she's an eternal optimist.

Granted, Anne is a fictional character.  In reality, a child under similar conditions may have withdrawn into a shell.  Or worse.  Mrs. Lynde's dire warnings that Marilla should worry about being poisoned aren't without some traction.

My point being, maybe I need to be like Anne.  Maybe I should gather up my reading, and a bottle of raspberry cordial, and my best puffed sleeves and be grateful for what is.

Even if sometimes, I feel like smashing a slave over the head of... well, life. 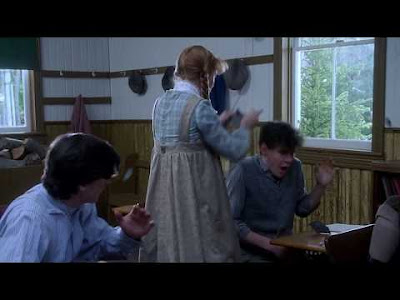 Christopher said…
I'll confess I haven't read Montgomery's books but I got sucked in to watching the TV adaptations--the ones with some of the Kids In The Hall--with a roommate several years ago. And it was Anne's abundant joy, and Mr. Cuthbert's amusement and appreciation, that drew me in. I guess I related to Mr. Cuthbert, who seemed to be awakened to joy by Anne, and I guess we all need that sometimes. If there isn't another person who can do it I think we need to be our own Anne.
Anyway I hope the appointments go well and Atlanta's rush hour traffic has improved since the last time I was there.
August 11, 2021 at 12:11 PM