Have you ever gotten bad results on a medical test?

I have.  Once upon a time, they determined that the cyst on my scalp was pilomatrical carcinoma.  About ten times, I've had my pap smear come back irregular, with cell dysplasia (but never enough to do anything but retest, hence the ten times).  My bloodwork over the years has shown messed up liver enzymes (stopped taking Tylenol), elevated levels of lots of different things, diminished levels of things...(started and stopped different vitamins).

A few weeks ago, I got a call that my mammogram had some results that caused concern.  Earlier that morning, I had gotten a text from my sister-in-law about that very thing - because I had just gotten both my mammogram and final covid vaccination in rapid succession, there was a chance I'd get a positive result back - false positive because of my lymph nodes.

So I made the appointment for the recheck, fully confident that it was a vaccine-related false positive.

I told the tech as much, and she pulled up the scan to show me that the site in question was in the totally wrong place for that.  She showed me what they were concerned about.  I couldn't see it as any different from a number of other blurry blotches - but that's why they make the big bucks.

After the scan, I was told to sit tight and wait on the doctor to read the scan to decide if an ultrasound was needed.

After that, I laid on the ultrasound table, planning my Ta Ta to Tatas party, complete with breast cupcakes, and they came back in to tell me it was just a cyst and that I was free to go.  I was relieved.  Actually, that's an understatement - I was ecstatic.  But...

I don't take my health seriously enough.  I know this.

But Matt and I have decided that we both need to eat better - and one thing we're going to do is eat more vegetarian meals.

Starting tonight.  I have plans for Indian involving lentils, greens, eggplant and naan. 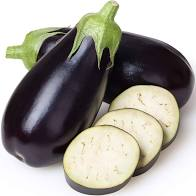 Obviously, it's going to take more than one eggplant to get me healthy, but hey - the journey of a lifetime, blah, blah...

And it's a start.

Meanwhile, I'm feeling good - I have a doctor's appointment next week so that the PCP won't hold my scrips hostage.  It may give more or different bad news - but I doubt it - and if it does, we'll - that's a just another direction on this roadmap we call life.

Keep on keeping on,