So, a few weeks ago, I made a comment about the extremely loud, omnipresent mourning doves in our backyard on Facebook: 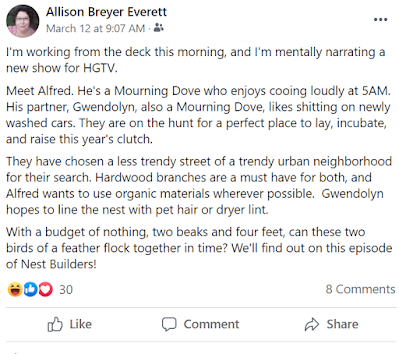 Well, the joke's on me.  One of the pairs has chosen our deck to build a nest.  We have a utility shelf out there where we keep assorted bottles of chemicals, lawn supplies, and random things we don't have another space for.  Well, they have appropriated the top shelf, back left corner to raise their family.  We first noticed them over the weekend, when I was sitting out on the deck, and one whizzed by my head.
I can kind of spy on them from my bathroom window, if I lift the shade and peep out of the very top of the window.  I can definitely spy on them from my deck, although just enough to see that one of them is on the nest.
Male and Female doves look the same - I mean, maybe there are tiny differences that they, and true ornithologists can spot, but as a backyard birder, I can't tell the way I could between a male and female cardinal.  But a little Google research and I found this in an article from the San Jose Mercury:

"Mourning doves are wonderful parents but many of them are lousy nest builders and often choose locations that could be called marginal at best.

It takes two to four days for the mourning doves to complete their nest, with the male bringing the twigs for the female to use. Once the nest is as good as it’s going to get, the female lays eggs — typically two."

I think we can say that the nest is as good as it's going to get.  Matt looked at it while the doves were out and commented that it was kind of loose.  True.  The robins here use a ton of mud to hold their fortress intact - they're roughly the size and heft of a softball.  Hummingbirds make gorgeous little baskets, the size of a Kennedy half dollar, but the weight of a dime.   This nest looks like someone cleaned out the gutter and dumped the contents on the shelf.

Once, I left a few zip ties out on the deck, and several weeks later, discovered that an enterprising blue jay had used them in its nest.  I can't even be mad about that - it's brilliant.  My grandfather used to call blue jays "clowns in baseball uniforms".  He may have stolen that from someone.  Google doesn't bring up anything - so maybe that's original.  It's accurate.

Anyway - we can expect them to be here for another month, maybe six weeks if they don't bail or get eaten first.  Piper hasn't noticed them to speak of - but every time I go out there, one of them is watching me.  That's the other fun fact I learned - they take turns sitting on the nest - I actually saw them swapping out this morning - typically, the male gets the day, the female does the night shift.  I wonder what they do with their time off?  And if it's an equitable 12 hour shift for each?  Once the kids are hatched, she hangs out with them, he goes and gets food.  She feeds them "milk" - which I can only assume is regurgitated food.  I only go so far in my research.

When I was a kid, there was a restaurant in Atlanta called The Lark and the Dove.  It was, I assumed, super fancy and really romantic.  I thought anything in the city was by default, very cool and grown up.  I now realize that the location is a tenth of a mile from my first apartment, in an area that is more sketchy and run down than cool - although, at the time (late 1970s, early 1980s), it may have been cool.

There are a ton of restaurants that no longer exist that had a cool vibe, or an alleged cool vibe.  I ate at one of them - The Coach and Six - it was mega fancy, and we did Thanksgiving there once.  I remember choking on an overlarge piece of strawberry.  I survived, and required no intervention, but I remember being wary of strawberries for many years (I would have been seven, tops).   There was (and I believe, still is) the Imperial Fez - a Moroccan place where you sit on the floor and there are belly dancers.  I took a date there once.   For my Junior prom we went to a place in Roswell called The Public House that was pretty snazzy.

When I got to college and pledged a sorority, I learned that our mascot was the dove.  Which is good - had I chosen to pledge the other sorority that was an option, I'd have had a squirrel as a mascot, and I hit a squirrel once, and Piper killed one once. I feel like that particular one was asking for it - it was sitting on a bush next to the deck late at night, and failed to clear the fence line in time.  These things happen.  I had to dispose of the body.

Anyway, doves are in my life, and have been for some time.  Am I rambling?  I feel like I am.

I'll call it a post, and I'll keep you posted.

Christopher said…
I've had some doves come to my window feeder. They're kind of goofy--they flap a lot and have trouble settling down. They don't stay long but I hope they get something. Also some people we know have set up a webcam in their garage and robins built a nest right next to it. Now they can watch the robins but the other night they saw a screech owl checking out the next. That's potentially pretty dark.
April 5, 2021 at 7:18 PM