Over the weekend, we gave the dog a summer haircut.  I don't know whether it was more for her than for us.  Honestly, I've been a little obsessed with her shedding recently.  I bought these little sticky discs that collect fur in the washer/dryer.    They're called Fur Zappers, and I kind of love them: 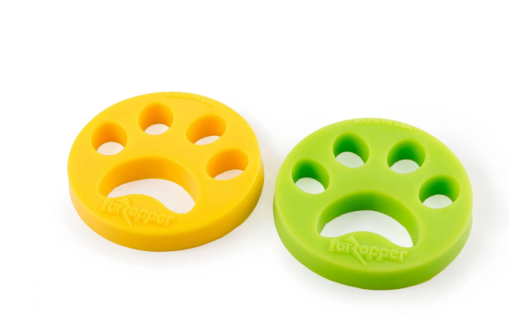 Piper is, as I believe I have mentioned, double-coated.  I assume that's the 1/4 Pomeranian DNA.  I don't know - I just paid for the DNA test.  What it means is that she has coarse, wiry topcoat, and underneath she has this soft fluff.  And I think that's what sheds most.  How the second coat makes its way through the topcoat, I know not - but I do a metric ton of sweeping, and I know of what I sweep.

Anyway, in addition to the hope of keeping her cooler this summer, and possibly cutting down the fur tumbleweeds that skitter across our floors on the regular, I had hoped she would be less itchy.  I also paired her new cut with a new Seresto collar.  And yes, I've heard that the collar has made some dogs sick, but she has worn one since they first came out and is doing fine.  I also read a statement by a vet who said the collars are fine, it's that some companies are making counterfeit versions, and you have to get a good one from a trusted source.  I feel that the benefit outweighs the risk on this one, and I stand by that.

Piper doesn't itch as badly as Lola did - but in high pollen season, there's a lot of licking, scratching, and chewing.  I get this.  I have dry skin, and I tend to itch sometimes.  But I try to keep my chewing and licking to a minimum.

Now that it's done, I don't know that I like it.  But, it grows, so we have that going for us.  I do think she'll be cooler, I hope she'll shed less.

What I do know is that after we shaved her, we did some work out in the yard, and the combination of dog hair and pollen made me itchy.   And sneezy, and at least two other dwarfs.

In other backyard news, our doves have arrived.  Hatched, that is. I got a sneak peak, and I even got to see them at feeding time.  They'll have a few days rest from my voyeuristic ways, because tonight, I head to Atlanta for a quick, action-packed trip.

I'm dreading the drive - but I have tunes and solitude, so it should be fine.  I hope.

That's it from here.  Fur, doves, pollen and roadtrips.

Christopher said…
Here's hoping the Seresto collar works. They seem like a good idea. If a dog gets sick it's easy to take the collar off. If you use a long-term medication it's not so easy to get rid of--or even necessarily to spot the source. And I hope Piper feels better with a trim.
And congratulations on the doves! We just had to chase away a couple who looked like they were trying to nest on the ground right where the dogs go in and out. I would have enjoyed watching them but, well, I'm afraid they wouldn't have been around long enough to watch if they'd stayed.
April 27, 2021 at 3:20 PM