I am not sleeping well these days.  I'm sure that a lot of it has to do with lack of stimuli, lack of activity, etc.

But it's not just that I have a hard time sleeping at night, it's that I desperately crave sleep at midday.

This is not new.  I got into a habit in college of taking an afternoon nap before my glee club class, which was a late-day kind of thing.  And I still needed and routinely got eight hours at night - but if not, I made up for the deficit on the weekends.

Which isn't how that works, unfortunately.  But it put me on a schedule of sorts that my body never got over.  Typically I want a nap around 2PM - my energy just dips.

I would love to have a few weeks where I am deprived of sensory cues (clocks, sunlight, schedules of any kind) and just figure out what my natural schedule would be.  Week one would be mostly just a reset - catching up on residual fatigue, learning to live without a clock... but then by week two, I might be sleeping for an hour every three hours, or eating once a day, or not showering daily.

I will say - I am washing my hair far less working at home.  Two reasons, at the moment.  The biggest is - it's freaking cold outside, and as you may not know, I don't own a hairdryer.  I did, once, own a hairdryer, but I never used it, so peace out.  I typically dry my hair with heat or a/c in my car, en route to work.  But since I'm not driving... you get the idea.  Getting out of a warm bed, to take a warm shower, then be subjected to cold wet hair for an hour is a lot to ask.

The other reason is - it doesn't matter.  I will concede and wash it when it gets itchy, or looks like an oil slick, or I have a phone meeting - but if that means I'm washing it twice a week, so be it.  It's not smelly  it's just aesthetically wonky.

I should probably be avoiding the super hot showers that I love to begin with.  My crocodile skin is especially crocky this time of year.  I truly do get ashy - my black next door neighbor commented that until me, she didn't know white people could get ashy.  See, we learn from one another.  White people can, in fact, get ashy.  And once again, because it's cold, I don't want to put on cold lotion and be cold until it gets absorbed - which takes a minute.  I have joke about a hot lotion gun that sprays it on in winter.  Or like when you drive your car through a car wash, and they have the spray on wax.  Like that, but lotion.

The takeaway here is that I'm cold, itchy and tired.  I think that pretty well sums it up.

In other news, I read today that there's some hubbub about the American Girl Doll of the Year 2021.  Her name is Kira, and the problem is, her storyline revolves around visiting her Aunts at their wildlife rehab preserve in Australia.  Lesbian, married aunts.  Yeah.  So that's got some folks with their panties in a twist.  Personally, I think we should focus on the amazing opportunity of going to Australia.  And getting to see kangaroos and koalas up close.  Now, to be fair, we have kangaroos up close here in Nashville.  The roo exhibit at the zoo allows you to walk among them - you have to stay on the path, but you can pet them if they wander up to you.  Once, Matt and I went on his birthday, which is in late July, and was incredibly hot that day.  The kanagaroos were all sprawled out in the dirt looking extremely uncomfortable, or maybe just lazy.  Some of them appeared to be faking dead.  I don't blame them.  They were probably tired.

Anyway, I really want to purchase Kira and gift her to a friend with kids who likes dolls,  I wonder if dolls are out of fashion in general these days.  If you have ever been to an American Doll store, and I have friends, oh, I have - you know what a booming industry that is.  My mother owns an old school Molly - back from before American Girl was a Mattel property.  She apparently looked a lot like Molly - they are basically contemporaries.

For years, I threatened to buy one that looked like me, dress it up, and take it on business trips with me to hold my business cards.

But this is about as close as it gets, and that's not me, is it: 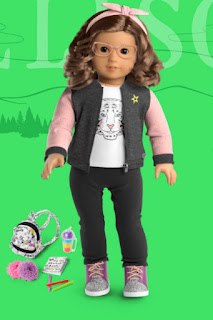 Now, in theory, I could take the mini-me to the Salon at American Girl, and maybe they could give her a cut, add some grey highlights and add a little more curl.  I'd have to upgrade her wardrobe a bit - but at that point, it's a bridge too far, you know?

Anyway - I may send Kira to a young friend. We'll see.

In other news, it's sleeting, and has been for some time now.  It's my hope that we don't lose power - we could still grill some hot food, but we have no firewood.  I think we'd decamp to the bedroom and conserve body heat under a down comforter.  And I'd probably sleep, or try to.

It all comes back around, see?

Stay warm in your neck of the woods, wherever that is.  Unless you're somewhere hot, in which case, stay cool.