We here in middle Tennessee have survived what I will assume is the extent of our winter, all packed into a week.  Sleet, freezing rain, below freezing temps!  It was awful for about five days, and now we're making a headlong slide into temperatures near 70.  Yeah - I don't get it either.

What I will say is, I have a screaming headache due to the the change from frigid to balmy.  Or maybe it's a headache of unknown origin.  Who can say?  I need to hydrate - that's the abundantly clear message in all of this.

I am setting up tons of appointments - for me, for the dog, for my mother - time to get everyone's healthcare needs for the first half of the year nailed down.  It would be ideal to have everything I need on one day, making a single long trip to Franklin rather than several sporadic and inconvenient ones.  I set up medical providers based on proximity to my office... ten years ago.  So, you know - times change.  It's possibly/probably still easier than navigating the labyrinth that is Vanderbilt, but I should look into making some convenience upgrades.

All of this to say, I am taking care of business.  Mostly that involves the act of filling and emptying - be it the dishwasher, the fridge, the laundry, the money in my bank account - it's the matter of adding, subtracting, re-adding - ad infinitum.

I think I am sleeping better.  Possibly due to daylight increasing, maybe because I just got tired enough that my body relented - what I can say is, I am having some wild dreams.  I had one the other night where my late grandmother was not only alive, but gave me $100 to lose some weight, and the promise of a trip to Europe if I succeeded.  I can't say if that is for certain a tactic she'd have used, but it felt very real.  In the dream, my (alive) father cautioned me not to tell my mother.

I had another dream where I was at a house party, and an old customer of mine fell out of a window of the top floor of the house.  He lived.  Got right back up, came back in and started partying again.

My dreams about airports are still in full effect.  I had one recently where I had to try to get through security without an ID.  Another where my luggage got taken away.   Sorority rush dreams are less about whether people know or like me, and more about what to do when a biker gang shows up to a party without masks.

I think you could say I'm anxious.

I have this app on my phone called Peak - it's brain games - probably 2 dozen in all, and it sets you up with a daily workout.  Some are math, some are coordination, some are word-based.  There's one called Objectifind, where you have a screen full of tiny images and you're prompted to find, say, a loaf of bread, or two watering cans - and it's timed for two minutes - bonus points if you find the item quicker. 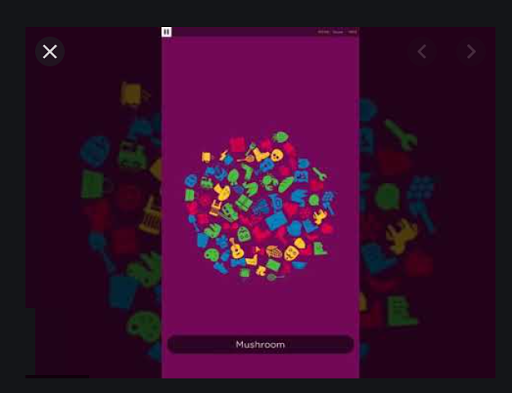 You get the basic idea.  I'm not great at it, but it's not my worst game of the app.  That would be one called Perilous Path, which I would say is similar to Minesweeper.  My best games are all in the Language section, duh.

So, I think of dreams as kind of one of those image screens - there's a lot of clutter and you have to find whatever you can among the millions of guitars, boots, skulls, and scooters.

Sometimes, though, dreams are a little more direct. 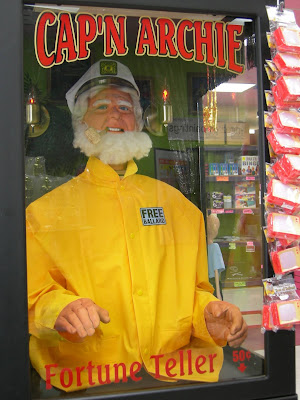 Meet Cap'n Archie.  He lives in a Fortune Telling Machine in Seattle.  Archie and I have met a few times when I've gone to Archie McPhee to shop.  I always have change for the various coin operated opportunities.  Like Cap'n, the Wallingford Beast, the glow in the dark diorama, and of course, the photo booth.

Archie McPhee, for the unfamiliar, is a novelty shop in Seattle.  They also do online/mail-order sales, and over the years, I have spent a lot of money with them.

Cap'n Archie is like Zoltar, famous from the movie Big.  He sits in his cabinet and dispenses, rather than wishes, sage advice and an insight into things that come.  But the point is, he is very direct.  You put in 2 quarters, you get a card with a short sentence or two.  Done and done - you are free to move on to the section where they have all kinds of bacon-themed novelties.

Some dreams are like Archie's fortune card - direct, and to the point.  Like, you know, your grandmother giving you $100 to lose some weight.  There's not really a lot of symbolism to dig into, there.  Cap'n Archie has spoken.

I have to admit, I am feeling a little stuck at home these days.  Mostly because I'm stuck at home.  As rough as some of my trips to Ohio, Texas, Kansas, California, wherever  were - I do kind of miss some of the novelty of travel.  I'd like to go back to Seattle.  I'd like to get back to Anchorage.  And Portland (OR, although, ME, too)!  And hell, even Cleveland has some appeal.  But really, the Pacific Northwest is calling to me.

Then again, so are some international locations.  Amsterdam!  Budapest!  Montreal!  Montego Bay!  Even, and forgive me for being topical, Cancun sounds good - although, for a few bucks more, I'd hold out for Cozumel.  Better for snorkeling. And lounging  in that yummy hot Mexican sun by a pool, drinking Squirt.

Squirt may be the most unfortunately named drink in the history of mankind.  But it's delicious!  See also:  Fresca, Ting.

Tonight, I'll be traveling to Franklin to assist Matt in getting our truck home.  It's a long story, but it's the comedy and tragedy of being a three vehicle, two person household.  Worth noting - the one thing that has helped greatly about being home is that my mileage on the car has basically been reduced to nothing.

Clearly, I need some caffeine and fresh air.

Christopher said…
Is that a giant lobster claw in that picture of you? I don't know how anyone could not love that. Anyway I hope to go to Seattle someday, although the cousins who lived there have now moved to another part of Washington state.
Congratulations on not having to navigate the maze of Vanderbilt. After more than a quarter century of working there I still get lost in some parts of it. Admittedly I don't work in the hospital but still I go there regularly for appointments and even when they're somewhere I've been before I get edgy wondering if I'll be able to find it.
February 24, 2021 at 6:38 PM