So, I finally made some forward progress in my video game, and it was satistifying, but not the be-all, end-all I had hoped.

And that's OK.  I can keep working at my leisure.

The other day at Kroger, I saw a cheap paperback by an author whose work I generally enjoy - Jennifer Weiner, who wrote In Her Shoes, Good In Bed, and others with titles I don't currently remember and don't care to look up.

The title was Mrs. Everything, and was the story of two sisters growing up in Detroit circa 1950s to present day. 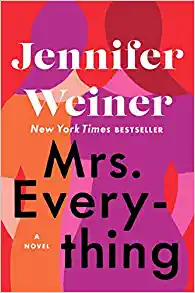 It was a good read.  Weiner has several "typicals" that she puts into her work - central themes that seem to appear in her books a lot.  Many authors have this.  To wit:

LM Montgomery - A pair of fraternal twins, boy and girl with twee names (Jack and Jill, Dora and Davey, etc.)

In Jennifer Weiner's case, she writes what she knows - so her characters are often Jewish.  She likes her native Philly, she writes about weight issues, and most of all, parent abandonment.  Her father apparently skipped out on the family when she was a young woman, and that theme gets explored ad infinitum in her books.  Either one parent is gone (died, estranged) or the protagonist is orphaned at a young age.  She's definitely working through some stuff there.  There are complicated ALWAYS sibling relationships - sisters who are very different but both want the same thing from different angles, usually.  She also works lesbians into her plots - I am not sure whether her mother came out after the divorce or if this is just something she has put some research into - but there's plenty of girl-on-girl - never in a way that's exploitative, but it feels true-ish.

So in this one, it's the story of two Jewish sisters who are night and day.  Dad dies early in the tale, Mother is cold and withholding to both girls, punishing them for living their truths. But this one has a lot more than that.  Sort of, but also not really.

My point is, I read the book in two evenings, and every time I read something, I'm reminded of how much I enjoy reading, and how I need to do more of it.  My next book is a sequel to one of my favorites.  The sequel is Ready, Player Two - so I bet you can deduce the title of the first one.

I think reading might be a better use of my free time.  That's where I'm going with this.

That may also be due to this web publishing overhaul I've been battling for a few weeks now. It requires a lot of focus and minutiae - two of my weaker skills.  But I will be glad we have the outcome we do, once we put it to bed.  But right now, at the end of the day, more screen time just doesn't suit me.

So, Mrs. Everything by Jennifer Weiner.  If you like to read and you see a copy on the cheap, or whatever, at the library - it's pretty good.