After a nice long weekend of holiday, it's a little hard to get back into the swing of things, it won't be long until we have another set of holidays.  That's the way it works, and I'm glad for that.

Thanksgiving was, honestly, delightful.   We cooked our deep dish pizza, it was delicious, and clean-up was a breeze.

I put up the icicle lights on our house for the first time in... at least three years, maybe longer.  They're pretty, festive.  I'm glad I did it.  I also, for the first time in over a decade, put up a tree.  I decided that given the messiness and expense of a real tree, I'd save us some hassle and use the silver tinsel tree I bought myself before Matt and I got married.  I did purchase some new lights for that tree, as, in the intervening years, LED lights on silver filament have hit the market, and you can't see cords like you would with a cord that is white or green.  The tree is only about 4 feet, so it's a quick, easy decorating job.  I friend of mine told me my FB post of it was beautiful.  I misheard him and thought he said pitiful.  I am not sure I actually misheard him.  He may have backpedaled.  It's fine.

So, I'm a little less grinchy this year, maybe.  Or maybe it's a case of fake it til' you make it.

I did end up cooking a turkey breast because I love an after-Thanksgiving sandwich.  I made two.  I used the remaining turkey to make a soup - it's good, but I think I'd rather have had more sandwiches.  More is the pity.

Christmas cards go out later this week.  I am sending them as close as a quarter mile, and as far away as Paris and Anchorage.  I should look it up, but I think it may be faster to get to Paris.  Well, Anchorage is about 1000 miles less than Paris if you fly.  If you drive, it's roughly even.  Of course, I don't think I'd enjoy the 66 hours in the car.  But still - that's a long way for mail to have to travel.   I have several cards headed to Georgia, some to Colorado, many here in state.  California, Virginia... I am lucky to have so many good friends in my life.

So in theory, it's beginning to look a little like Christmas.  I had to go pick up documentation of my flu shot at Walgreen's during my lunch break, and they were playing a cover of Have Yourself a Merry Little Christmas.  Not a good one.  I prefer the original lyrics - they're a bit more bleak, but honest - and this year, timely.

Originally, the stanza was, through the years, we all will be together, if the fates allow/until then we'll have to muddle through somehow.    The second half was changed at the request of Frank Sinatra, for his Christmas album.  The new, and now more common version is "Hang a shining star upon the highest bough."

This year, we need the original version.  That's just my two cents.

I mean, in theory, they can both exist.  I just prefer my Christmas with a dash of melancholy.

Some years ago, I learned about a nice tradition in some Christian denominations called either Longest Night or Blue Christmas.  They are services that tend to take place on or near winter solstice, and they allow for those who are grieving during the holiday season to take time to contemplate and acknowledge their grief.  I think that's a nice, healing sort of thing, and I know how hard it is to get through a holiday when you are so overwrought with sadness that the act of putting on your coat wears you out.

Given Covid, I don't think anyone is going to be having living Blue Christmas services, but online, maybe.

Speaking of - the other day, I heard Elvis' Blue Christmas on the radio - it's in my top five favorite Christmas songs.  I also like the version by Seymour Swine (a Porky Pig impersonator).  I love the Ronettes' Sleigh Ride, and Jose Feliciano's Feliz Navidad.  There are a ton I used to sing in chorus in school - there was one called Adam Lay Ybounden - I don't know how it was Christmas-y, but I liked it.  Jeanette, Isabella was always a classic.  In our first Christmas rehearsal each year, some of the guys would sing the "Ah, Ah" line in a sexual way.  Once they got it out of their system, we moved on and did it the right way.  It's funny what you remember.

Much like me personally, this post is all over the place.  I think that's kind of par for the course.  My days are all so loosely woven together, there are a lot of lumpy parts.

One of the things I haven't done is finish up Christmas shopping.  Honestly, I've barely started.  I have something for my sister, one thing for Mom and a tiny little thing for Matt.  Which means I have work to do!

I honestly prefer giving presents to receiving them.  I just think it's more rewarding.  I have everything I need - why not enjoy delighting others?

Which reminds me - Tony Hsieh, former CEO of Zappos and author of Delivering Happiness died as a result of injuries in a housefire.  He was 46.  I am 46.  His book, his energy, his ideas inspired me.  I know that he will be missed by many.  What I was not expecting is the text I received from a casual acquaintance with a link to the article in case I had missed it - he knew what a big fan I was of Hsieh.  That blew me away - it was someone I worked with for a while, but haven't seen in four or five years.  A friend, to be sure, but not a close friend.  It goes to show you - people remember more than you might think.

And with that, I'm calling it a night. Because I'm tired.  Because I can. 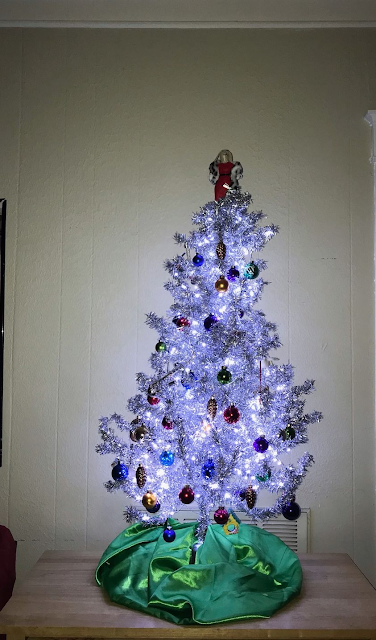