So, one of the more positive things about all this time at home is that we have technology that makes it more bearable.   Namely, I'm thinking of streaming services.  Being dual income, no kids makes it not only affordable, but nearly compulsory for us to have Amazon Prime, Hulu and Netflix.  So we do.  I also have Disney Plus, and I need to cancel it - because we never use it, and I've watched Hamilton once.  Put that on the to-do list.

Anyway, since theaters are closed, movies are all streaming these days, and I don't actually hate that.  To the contrary - I find it enjoyable. I always get the seat I want, the concessions are cheaper, the bathrooms are more accessible and are cleaner.  Plus, I can wear my bathrobe - which is really only otherwise encouraged at midnight showings of The Big Lebowski.  Side bar - once they had one of those here in Nashville at the Belcourt.  Matt went as The Dude, and I went as Walter Sobchak.  It was epic.

Anyway, there is a movie I had been reading about, hearing about on social media, and so I decided to give it a watch.

The Happiest Season is a holiday rom-com featuring (hang on to your hats) two women!  Lesbians!  Christmas Lesbians!

The opening credits show, by way of simple animations, the meet-cute and relational evolution of Harper and Abby.

Harper (MacKenzie Davis) is a journalist in Pittsburgh, Abby (Kristen Stewart) is getting her PhD. in Art History at Carnegie Mellon.  It's about a week before Christmas, and in a moment of makeout bliss, Harper invites Abby (whose parents died ten years prior) to come home with her for Christmas.  Abby says yes, and we cut to Abby and her best friend picking up an engagement ring - really pretty - yellow gold, emerald cut diamond.  It must pay well to be getting a PhD in art history.  She tells her best friend (played by Dan Levy, who like his father before him, can do no wrong) that she's going to get Harper's father's blessing and propose on Christmas morning.  Which is adorbs.

Then Harper drops the bomb in the car ride to Mom and Dad's:  she hasn't told them she's out.  They think that Abby is her roommate.  In spite of this, Harper manages to cajole Abby into maintaining the charade for a few days, as Daddy's mayoral campaign has the house in upheaval.  She'll tell them right after the holidays.

Hilarity and heartbreak ensue.  Exes pop up in awkward places, sibling engage in rivalry, privacy is compromised, accidental shoplifting occurs, and everyone gets what they want at the end, without having to compromise too much.

Aubrey Plaza (Harper's ex), Mary Holland (Harper's sister) and Dan Levy (Abby's best friend) were the standouts.  I love Mary Steenburgen, but she's better when she doesn't have to be so contained.  She was DELIGHTFUL in Last Man On Earth because as a drinky, don't-give-a-damn, post-apocalyptic woman, she could really move around in her character.  Here, as Harper's mother, her character was kind of one note.  And not that great of a note, either.  Not her fault - and I understand the writing choice - you have to use shorthand to get the point across.

All of that to say, I wanted to love it more than I did.  I think I was looking for something with as much humor and heart as Schitt's Creek, and let's be fair - that's a tough act to follow.  I just completed the final season, and there were tears.

Anyway, The Happiest Season was Hallmark-level Christmas entertainment - not terrible, not that good, and a pleasant enough way to pass time.  I do give props to Clea DuVall, who was behind it.  I loved her in But I'm A Cheerleader - which I think was a much more important look at the whole "coming out" theme.

All of this is easy for me to say, because I've never had to defend my heterosexuality.  I have had to defend poor choices in dating material, but that's a universal feature of dating, is it not?

To quote Mary Holland's character in the film, "I am an ally."

Will I watch it again?  Probably not - but I am glad it exists because it is there for the people who relate to it.

My Christmas go-to is A Christmas Story.  It's just who I am.  Stuck in nostalgia in the midwest in the 1940s.  Melinda Dillon is a treasure, and so much of the dialog has made it into my daily life.  Triple dog dares, Oh fuuuuudge.  You'll shoot your eye out.  Bumpus Hounds.

But Die Hard has merit.  Miracle on 34th Street is amazing.   I can pass on National Lampoon's Christmas Vacation.  Sure, it's funny, but it is frantic enough that I find it stressful.  Plus, National Lampoon's Vacation was perfect - why try and out-do that?

To each his own.  But if you like Kristen Stewart or Aubrey Plaza, watch this movie.  If you ever wondered what a love child of Emily Blunt and Juliette Lewis would look like, take a strong gander at Mackenzie Davis.  If you want to see the naked desperation of someone who just wanted to be included, watch Mary Holland's performance.  If you enjoy watching an impeccably dressed Mary Steenburgen do the best with what she's given, this is the movie for you. 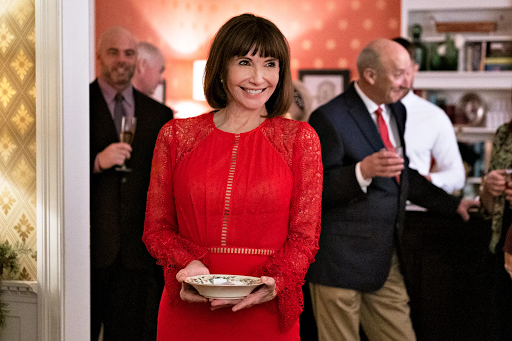 Christopher said…
I would watch this just for Dan Levy, and I just read a review in which one of the actresses (it might have been Stewart) said she was intimidated by him before she met him but he was really nice and fun to work with. I love that he's as nice as he seems.
A sidebar of my own: in an interview for the Bullseye podcast Eugene Levy said that when Dan came to him with the first script for Schitt's Creek he was afraid to read them because "what if it wasn't good?" It's so sweet that he didn't want to hurt his son's feelings but we are so lucky both that the script was good and the elder Levy did read it.
Anyway I'm tickled to see some Christmas movies with LGBT characters even if this does sound like it's borrowed a bit from The Birdcage, but without Nathan Lane's John Wayne impersonation.
December 17, 2020 at 11:47 AM