My parents had sort of a European sensibility - or what I perceive as such, when it came to raising us.

Basically, they didn't object to sex and nudity, but were hesitant to expose us to violence.

I remember seeing Blue Lagoon with them in the theater.  I remember watching American Beauty with the - a little awkward, but a great movie.

The other night, I did watch Full Metal Jacket.  Which was similar thematically.  Also a little violent - but there was humor, and drama and philosophy. And some killer acting.  But war is, as they say, hell.

I don't really have any interest in Platoon.  I've seen Full Metal Jacket and Apocalypse Now - I feel like that's enough of Vietnam to last a lifetime. I would consider Miss Saigon, though to be honest - not really my first choice.

Which reminds me - TPAC's three show Broadway package next year is a giant NOPE from me. Oh well.

Matt has started a new video game that is decidedly not violent.

It's called Stardew Valley, and it's about a young man (or woman, player's choice) who ends up inheriting a farm.  So far, Matt has four chickens and a hen house, a cabin, crops, and a stable on the way.  It's pretty soothing to watch - and very simple.  He farms, he mines, he attempts to charm the single village ladies.  I don't know - it's my kind of game.  I fell in love with SimCity long before there were The Sims.  And I love The Sims, but I'm not great at it, and this feels way simpler. 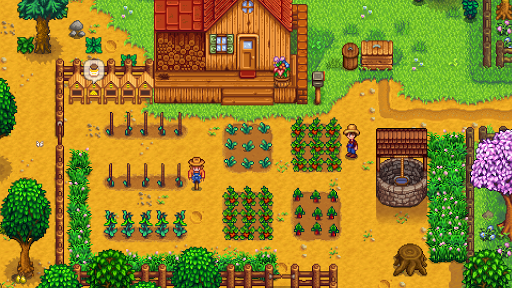 I'm still plugging away at my brain enhancement app - Peak.  Today is my one year streak of continuous play.  I'm not sure how smart I've gotten in a year.  Ask me later.  In a few more years.

I also started taking French quizzes online because, you know - why not?  Apparently, this app thinks that on (one) equals nous (we).  So you could say "We have a dog" and the same thing could be said as "One has a dog".  I disagree with that.

I also have hard time with the singular "they".  I don't mind it ideologically, I just have a hard time with it coming out of my mouth.  You spend 40 years conditioned in subject/verb agreement, then they change the rules.  It's fine - I'll come around.  For what it's worth, I'm she/her.  Or, you know, just call me Allison.  It's not that big of a deal.

I could use something sweeter and simpler - like a farming game, or some kind of chill RPG.  Because when reality is a little tiresome, it's good to escape.  And I can't really escape into word puzzles and language lessons.  Mama needs a narrative.

I guess I should be reading more, and more often.  But I'm not.  I also need to send Mom something new to read.

My birthday is in a few weeks.  I am thinking of treating myself to a new pair of shoes.  Namely, Converse low-tops in Maroon.  I've owned navy ones, and gray - it's time.

Last night, I somehow got a snippet of lyric stuck in my headbrain, and I could not figure out where it was from. I thought I knew the tune, but I couldn't get past about three words.  One of them was unusual enough that this morning, I looked up "songs with transmute in lyrics".

Voila!  Turns out it's Lusty Month of May.  I spent much of the night running the lyrics of Hamilton and trying to remember ritual songs from my sorority.  It was annoying, so I'm glad I cleared it up.  Memory is a bitch kitten.  I have my own that I rule over - but often find myself overseeing my mother's as well - and that's exhausting.

Speaking of exhausting... I need to take a break.  We have a new hire group in house, and I finish that session Friday.  I am strongly considering a few days off at the end of the month.

And maybe a few days in early November.  To vote, and to watch election results.  It's going to be a totally different experience this time around.  I'll be at home, and not eating pasta out of a cardboard bucket in Ohio.

If that sounds pathetic, it's because it was.

Anyway.  All of this to say - watch a good movie.  Sexy, or violent, or violently sexy - whatever.  It's all good.

Don't watch the debates on Thursday, because there are none.  Watch something great and happy.

Be good and be happy.