It's funny what will set you off, isn't it?

Once upon a time, I was in the High School Drama Club, and I was active in it.  I was in at least one show per year, won a few awards, held a few offices - including President, my senior year.

My freshman year, we had a woman who was a little wacky as our teacher.  She was brand new, replacing a beloved legacy teacher of many decades.  She had been a student at the school, and to be honest, she was a hot mess.  There was some scandal regarding her and a student, and at the end of the year, she was kicked to the curb.  Sophomore year, we got another former student as a teacher.  He was also a mess, but waited to get involved with students several years hence at another school.  He was...OK.  He transfered to another school to teach my Junior year, but came to run drama club after school.

My senior year, they hired a drama teacher, and the beloved dude teacher was ousted.  There was general outrage from most of the club, but as president, I implored everyone to stay cool and hang in there.  The teacher didn't much care for me.  She didn't cast me in fall play, but asked me to stage manage.  That hurt. It hurt a lot.  Then she picked a play for spring that was frankly, a bad choice - Our Town.  We had no male actor strong enough to play the lead,  the narrator, so she had her husband do it.  I thought that was super-shady and probably said that to someone who told her.  I ended up getting called a "ringleader" and didn't get cast in Our Town, either.  Which was fine.  I ended up not auditioning for the musical, but in restrospect, I know they would have cast me in a role that would have required me to wear a fat suit.  I wish I were kidding.  Maybe they wouldn't have, but the girl who got it did.  So, I'm just saying.

By then, I was over it.  I was waiting for the end of year banquet, because as the Senior who had spent four years building up the club, of course I was going to win the Vagabond Award.  Which was, is, and ever shall be a big deal.

It was given to a Sophomore.  A friend of mine, as it happens.  I was frustrated to the point of tears.  I managed to hold it together, but after the banquet, I had a big old pity party, table for one. But by then, I'd had two years writing for the school paper, and I went to UGA to get a degree in Journalism, rather than College of Charleston for Drama.

We moved from a system where seniority was a factor in casting, to one where it wasn't.  I lost out on better roles as a sophomore because there was a senior who "deserved it more".  And as a senior, I lost out on a role that I know in my heart I could have done as well, if not better than the Sophomore who got it.  Because the drama teacher needed someone with a car that could shuttle actors to the theater, probably.  I can't prove that - but I can't not prove it, either.

I also don't like that she called me into her classroom to chastise me, and then told me not to share the conversation with anyone.  Look, if you aren't comfortable with others hearing what you said to me, do you really need to be saying it?

I didn't like the way that all went down.

The same year, my team was the only one in our school who didn't make it to World Finals in Odyssey of the Mind.  So I went as a spectator, but four years of hard work went more or less unrewarded.  And I remember, very clearly, my teacher, with whom I am still friends, saying to me, "Second place isn't chopped liver." And the cool, calm voice in my head saying to me, "Well it's not pate fois gras, either."

Later, my father told me that he was proud of how well I had held it together and cheered my team up on the ride home from the competition.  He was also impressed with our presentation.  I had written the play, and honestly, it was really good.  We lost to a team with flashier costumes, a louder crazier sketch, and a little more luck.

They flopped at World.  The State Director turned to me after they competed and said, "Your team would have been so much better."

I knew. She was right, and I knew.  That cool voice in my head said, "Well it's a little too late for that now, isn't it?"

At that point, my brain had already checked out.  I was interning a few days a week at Cox Media, I had my summer planned, my college career was ready to go.  I had two guys I was dating, and you know - I was going to be fine.

I mention all of this because the sophomore put up pictures from the play the other day - five women laughing together on a stage.  I know I'm in that picture, invisible, off to the side.  Or maybe I took the picture.  It's a rehearsal, I think.  I am either standing offstage behind the curtain, or I'm breaking up a fight with the wardrobe and makeup girls, or... who knows.  But I wasn't on the stage, laughing.  Looking at the picture was a total punch in the gut.  I really thought I had moved on from the resentment of all of that. 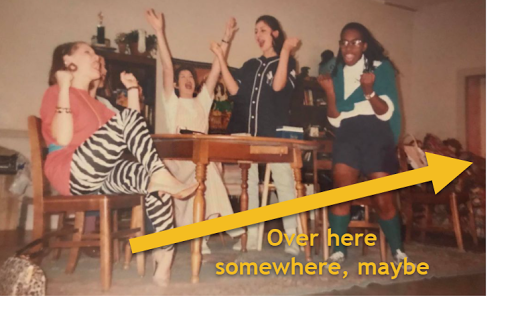 I'm not mad at the actresses - I'm friends with all of them.  Seriously.

I'm honestly mad at the teacher.

I had been an ally to someone who stabbed me in the back.  I realize now that I got the short end of the stick for four years.  And that sucks most of all.

I've done a play and dozens of improv shows since that era.  I know I can act.  I know I can write presentations that dazzle.  I did stand-up that killed.

But there is a part of me that died behind that curtain, or in the packed Pontiac Sunbird shuttling a group of actors around, or in that classroom.  One of the big bones of contention was that we ended up having a late rehearsal the night of my 18th birthday.  There was a choral concert, most of the girls were in Chorus, so they came after the concert.  I was annoyed.  It was your average Tuesday, so not like I was going out to get buck wild, but it irked me.

And you know who came to my rescue?  My AP Euro History class.  I guess I had been kvetching about it to them, and the morning of my birthday, first period, I am getting to the classroom as the bell is ringing and the door is locked.  I swear a few times and knock on the door.  They had a birthday celebration for me.  Casey, Amy, Sarah, Melissa, Stephanie, Jonathan, and Mrs. Russell.  It was the nicest thing about my 18th birthday.  I think about that a lot.  Someone even got the Drama teacher to sign my card.  I have to wonder if she knew before that moment that she had fucked over my 18th birthday.  Maybe.  Whatever.

Mrs. Russell died a few years ago.  She was amazing, and kind and had a huge heart, and I probably never thanked her enough.

Or any of them enough, really.

I don't have a point.  I've just apparently still been carrying around a 27 year old grudge.

That's one of my special numbers, 27.  Maybe it's time to let that one go.