When I think back on all the crap I learned in High School...

That may be one of the best song lyrics ever.  Thanks, Paul Simon.  I once heard or maybe read that Kodachrome is supposed to be a marijuana song.  That Kodachrome was meant to reference the small black and gray film canisters, in which people carried their stash.  That may or may not be true.

It is definitely not the point of this post.  Here's a little insight to how my brain works.  I was going to title the post Black and White - but then I realized that might be a little tone deaf in these times of racial inequity and strife.  Then I thought, monochrome, which led me to Kodachrome.  At which point, I started thinking about the time we took my parents to see Simon and Garfunkel, and riding MARTA (Atlanta's mass transit train) home, my father and several other concert goers started singing Kodachrome.  Dad was the instigator, and we gave him the nickname, "The Mayor of Marta".

None of this has to do with anything that the post was intended to be about, though.

I was mostly thinking about Piper.  Who is black and white.  See where I meandered from to get here?

This whole pandemic thing has been great/horrible/ok/refreshing/exhausting/a lifetime/no time at all/exciting/scary/interesting/boring.  A mixed bag, if you will.  And I think you will.

My big concern about working from home was two-fold.  The biggest one was my inability to focus.  And that has more or less turned out to be easy.  There are days when I get distracted and feel the need to attack the dust bunny in the corner, but I do it, and then I power through what's next.  I am getting things done - and given some of the logistical limitations, I'm happy with how it has gone.  I can work from anywhere in the house and be comfortable and productive.  Lately, the VPN drops if I go outside, but what I can do, and have done as a fix for this, is, I sit in the laundry/mud room, which has a door leading to outside.  And one leading into the kitchen.  It's sort of an airlock, just not airtight.  So anyway, if I go on the deck, no VPN, if I sit 6 feet away, in the doorway of the laundry room, open to the outside, I get VPN.  So I get the benefit of fresh air, but it's shaded and covered.

Piper.  As far as working from home, she was the secondary concern.  Piper is a fairly active creature who needs space to roam, stalk, sunbathe, bark, chase, and run full tilt for no apparent reason.   And that space is not indoors.  Because inevitably, she'll attempt to abscond with a shoe, a sock, some underwear... and shred it. Not a good look for anyone.

Outside, there are fewer temptations.  I won't say none.  At the moment, she's gnawing an old plastic tumbler I left out there.  Not a huge deal in the grand scheme, and not worth intervening.  She's safe, happy and minding her own business.  Plus, if anyone passes by in the back alley - she raises holy hell.  So, it's not perfect.

But the fact is, we have kind of gotten our routine synced.  I know that when we're not here, when we go into work, she probably sleeps all day.  And she still sleeps a lot.  If I give her a good hour, hour and a half outside in the morning, I can count on her napping from 10:30 - noon.  Rinse and repeat.

I have learned that she likes a little broth in her breakfast.  I had reserved the broth I used to cook chicken in the instant pot, and doled it out on her kibble over a few days.  She liked it.  Now, I reserve the chicken water as a habit.

She has learned that I'm going to give her at least a corner of my sandwich at lunch, and she waits patiently.  She knows I'll share my watermelon, if  I have that as a snack.  I recently apologized to the vet, saying, "Look - I know she needs to lose weight.  We're all fat.  Covid has been hard for our household."  My vet has the best doctors.  Hands down.

I found a toy that she loves - ordered it from BarkShop.com - highly recommended.  She hasn't destroyed it, and even though I had to tone down the squeaker on it, she still loves it.

So, we have found our way - and as much as I loved her before, I find that I am just really enjoying getting to love on her throughout the day - the many moods of Piper.  Not all of the moods are good.  There are days I threaten and fuss.  But when she's good, she's very very good. And when she's bad, she's still a hell of a lot of fun.

She gives me nice bright colors - the greens of summer.  She makes me think all the world's a sunny day - oh, yeah.

It took me a minute, but I knew we would get there eventually.

This is my girl, asleep with her toy, and some electronics. 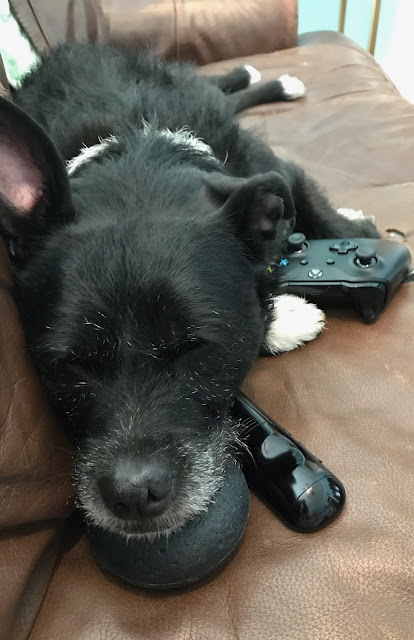