on August 05, 2020
Well, y'all - it's been a hot minute.
Things here in Nashville are, well, a mess - honestly.  Apparently, a group of bachelorettes went to Mockingbird (my favorite little hip restaurant downtown) and upon being told they couldn't all sit together (Covid) and needed to put on masks (Covid), threw a hissy fit, stormed out of the place, and one of the girls turned and coughed all over the staff.  Same weekend, a 500 person "house party" in East Nashville got shut down.
I don't know who I blame.  Everyone, really.  I just need folks to get it together, act right, and chill the hell out.
A camp in Georgia caused a 260 person outbreak.   What the actual fuck?  Who thought putting a bunch of kids together in tents would be a solid plan?
Baseball is having a few Covid problems.  Hockey has had none.
Hockey is being played in a bubble, well, a pair of bubbles.  The players are all sequestered in Canada - two cities, Toronto and Edmonton.  They stay in their hotel rooms, they go to the arena - and that's it.  They left their families, and they're going to play a shitload of games in the next few weeks to determine the winner of the Stanley Cup.  So far, no cases.  Everyone gets temperature checks, tests, and the means to survive within the bubble.  Honestly, sign me up and send me to Canada. I'll stay put in a hotel - I can even work from my room.
I've been to Canada twice, and I loved both trips.  Once for pleasure, once for business.  In that order.  I went to Montreal for a week to see live comedy the summer I was 20.  The Just for Laughs festival.  I went alone.  The first night I was there, I felt so intimidated, I went to the movies by myself - Muriel's Wedding.  I'd already seen it once, but it felt like a good choice.  I ate popcorn for dinner.  I think.
On my second trip, for work, we went to Oakville, Ontario - a suburb of Toronto. And I loved it.  We ate at an Irish pub, the customer was nice.  I got Tim Horton's.  I like donuts.  Who doesn't?
So, yeah - Canada is feeling pretty right to me, at the moment - for not the first time in my life - and certainly not the last.
As you know, I've been watching a fair amount of TV, seeing as how I'm here all the time.  The most recent was catching up on a second season.
Joe Pera Talks To You is a weird little show on Adult Swim - ten or fifteen minutes per episode - they're the adventures of a mild-mannered Middle School choir teacher living in Michigan's Upper Peninsula.  I kind of love it.  He's very calming, certainly a little nerdy, but not over the top.  He drinks beer, he has a girlfriend (the Band teacher) who spends the night from time to time - they're a functional, normal couple.  She's a little odd - but as the principal of their school says, they "go together like a desk and chair".
Joe Pera, played by Joe Pera, reminds me of two people I went to school with - one is a friend I've known literally since birth - he was born six weeks before me, and lived across the street.  The other, I met in high school and dated for a year.  They both have that same gentle, self-deprecating humor that is pleasant to be around.  I think a lot about that universe that the show has created, and if I'd have a place in it.  I think that about a lot of shows.  And I have for years. 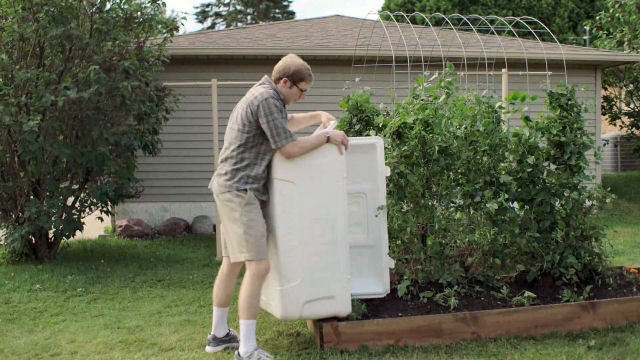 Here we see Joe and his giant cooler after a bachelor party.  It is implied that he was invited because of the cooler.  He seems to realize that, maybe.  But he doesn't care. His girlfriend asks if the weekend made him regret not joining a Fraternity in college - he says no.
Anyway, I guess I'm having some wanderlust.  I want to "Go North, Middle Aged Woman", as it were - with apologies to Horace Greeley.  Although, truth be told - I'd be happy to wander to Trader Joe's, such is my isolation.
I am of and from The South - and there's a lot of bad stuff that is attached to that, along with the good.  And that's true of everywhere.  Nowhere on this earth is there a history of a people that doesn't come with some baggage.  People come with baggage.  Some of it's good.  Like, family recipes passed down generation to generation.  A lot of it is bad - racism, sexism, genocide.  I think mostly, I'm bored.  The walls are closin' in on me, man!  Not really.  But I could use a good day at the spa, or... something.  Something you can't order on Amazon, that's for sure.
The South isn't all bad - I watched John Lewis' funeral the other day, and that was very life affirming and good.  And sad, but mostly good.
I have to keep looking for the good - in silly television shows, neighbors, the dog, hockey, Canada, and trips to the market.  It will all come together. It always does.
ae

Christopher said…
When we saw the Mockingbird incident on the news the first thing my wife said was, "We should get a carry-out order from them." And I'd gladly brave the trip downtown, although my own wanderlust has me looking toward Radnor Lake as a safe place for a change of scenery.
A funny thing about "Joe Pera Talks To You" is that "mild-mannered" is not a quality I associate with people from the Upper Peninsula, or "Yoopers" as they're known. But if my travels have taught me anything it's that you find all kinds of people wherever you go.
August 5, 2020 at 11:31 AM