on June 14, 2020
Because there hasn't been hockey since March, we've been watching a few other things here and there.  At the moment, Matt is playing a lot of video games, one where he kills zombies and runs errands for other people.  Dying Light, it's called.

But there are two shows -  one Netflix, one Hulu that have my attention. Both of them explore friendship.

The first one is Tuca and Bertie - an animated series about a toucan and a song thrush who are best friends.  The toucan is voiced by Tiffany Haddish, the thrush is Ali Wong.  In the first episode, Tuca moves out (to an apartment one floor up) so that Bertie's boyfriend Speckle can move in.  It's really about how two very different women can bookend each other and make themselves and each other stronger.  It's also weird, sad, sweet, and funny.  Their world is inhabited by other birds, talking plants, dogs, and it's bright and colorful.  It's also occasionally surreal.

The Hulu show is about a year old, but I just started it Friday night.  Pen15 is the story of a pair of middle school friends, Anna and Maya, in 2000.  The leads are played by women who are each 31 years old.   Which sounds weird, but honestly, they nail it - if you didn't know they were 31, you likely wouldn't guess it.  They're odd, quirky, not entirely popular or cool, but they have each other and are heavily devoted to each other.  It's very symbiotic.  The pair actually became friends in college during a semester in Amsterdam.  They are completely believable as middle schoolers, and even though my middle schooling was 1986-1989, there are enough similarities that I get immediately reminded of being that same age.  The "cutest boy" in the show reminds me of any number of the boys we crushed on - boyishly pretty, with a hyperactive hypermasculine demeanor.  The "good guy", their friend Sam, is the best one of the bunch - and they'll eventually realize one day in their late 20s.  Maybe I'm projecting.

One of the episodes features a series of faxed letters sent back and forth between Maya and her father, who is a musician on the road.  These are inspired by Maya's actual life.  But it's sweet how much her father means to her.  Obviously, I'm going to zero in on that.

Of course, in both cases, I start to question my own life, and the fact that I am not still in touch with a lot of my female friends from the past.  I mean, I eyeball them on Facebook, but for example, some girls I went to Middle and High School with just had a girls weekend, which they posted about on Facebook (obviously), and I felt wistful.

My life is good - I have my small set of ride-or-dies, and I feel lucky to have good people throughout my life - I just sometimes think back and wonder if I messed up along the way.

I know that right now, I'm in a valley, and after each valley, comes a peak.  That's been the path of this entire year.  The isolation has been hard, and it has definitely messed with my creativity in many ways.

The one thing that has me spinning at the moment is planning the picnic for the 4th of July.  I'm hesitant to plan a big gathering with lots of people, but I polled the people, and the talk is, yes, they think it's fine.  I tend to be a little more free-spirited usually, but this all seems overwhelming.

Father's Day is coming.  That's a challenging day, for sure.  Tonight, I attempted to replicate a dish my father used to make.  I remember it being better, which I am sure it was, when he made it.  It was heavy, but good - a smothered hamburger steak - and I doubt I'll attempt it again.  I need to get my shit together with my eating.  The good news is, Kroger was out of graham crackers, so I will be s'moreless this week.

By the by, here's a little logo I whipped up the other day.

It is the result of Facebook, where I commented I had been dressing like a counselor at Camp IDGAF since March: 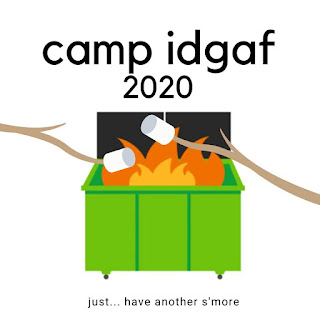 I may get t-shirts made.  Because I need another t-shirt like a hole in the head.

I'm in a little funk.  I'll pull out of it, and we'll move on, as we do.  Meanwhile, hang in there beautiful people.  As the German waiter said, "The wurst is yet to come!"