on June 20, 2020
So, Sunday is Fathers' Day, and if you are sans father to celebrate, it can be painful, challenging... but it can also be kind of liberating.
I will never not miss my father - and that's not just on Fathers' Day - it's 365 days a year.  I could find a reason to miss him on September 23.  For no reason.
But.
And here's where I feel like I'm making some progress...
I'm really glad he didn't live to see (broad hand gestures) all this.
He would have hated Trump. That I know absolutely. He would have been more or less ok with quarantining, except for not going to the grocery store.  He would have hated wearing a mask. But don't we all?
Where I find myself wondering what he would think, specifically, is what he would say about Black Lives Matter and the protests. I think he would be resoundingly for them, but against me participating. Not out of principle, but from a personal safety point of view.  And I get that.
But he marched, and demonstrated, and sat in and listened and learned. My father was woke before woke was a thing.
But you never stop being your parents' kid. Once, as a HS Freshman, I participated in a walk-out. Three High Schools did it. It was in protest of cutting teachers from the budget.
It happened on a nice spring day, and my boyfriend, a senior, invited me to go. I had already attended the PTSA meeting to voice concerns. The school furthest south marched three miles to our school, then we joined them and marched another three to the next school. When it was all over, we were walking back to our school, and a truck pulled over. My father. He was on his way back from the market, saw us, and offered us a ride. He was not mad that I walked out. Asked if I would get in trouble, and that was the extent of it. He was glad I had done it.
But those were low stakes.
This, at least to him, would be dangerous. And I suppose he would be right.
But if he were alive, he would be 79, and sickly.
And as much as I miss him, I will quality over quantity.
So, that is what I am thinking of this Fathers' Day Weekend.  And solstice!
To everything; turn, turn, turn. There is a season. And a time for every purpose under heaven. 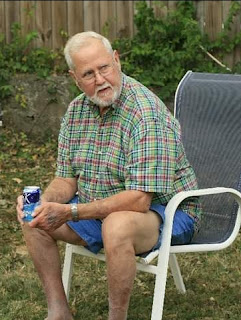