on May 12, 2020
I am having one of those weeks where my mood changes by the minute.  It's not great today, if we're being honest.  I'm a little depressed and a little sad, and a little disconnected.

The good news is, I'm alive and well - and there are people who can't say that.  Dead people can't say anything at all, unless it's through that John Edwards guy, and I honestly think he's a bit of a charlatan.  That said, I've been to psychics before just to get someone to tell me something that gives me hope.

I could, I suppose, find an online medium right now to tell me something I want to hear - but that seems like a lot of trouble for a little boost.

We ordered a new microwave this weekend - ours started strobing and sparking, and I just think that's as good a sign as any.  I will miss the old one.  It was a gift from my father about 13 years ago.  I killed our other microwave, and I was out of work, looking for a job, so for me, money was tight.  I called him sobbing, and he gave me a new one for Easter.  So it's just a microwave, but it was so much more.

I know - it's just a microwave.

I have tried to be fairly moderate in ordering things online - I am seriously looking at a new quilt for the bed - actually, a pair of them.  I have learned that we work best with our own covers because one of us likes to go full burrito at night, and the other has hot flashes, especially in summer.  I'll let you sort out who's who.

So I found a pair of washable bright cheerful quilts online, and I might order them soon.  Or not.

I know that bedding really shouldn't be top of mind right now, but I do find sleep to be kind of helpful.  Sometimes.  Last night, I had a weird dream that I was following a touring group that included some county musicians and improv comedians.  It wasn't clear if I was in the act, or just watching - but it did seem apparent that one of the wives of one of the musicians thought I was after her husband (I don't even know which one was her husband) and she hated me.  I also remember driving around looking for a chicken restaurant.  It was convoluted.  Hell, maybe sleep isn't doing me any favors.  The night before, I dreamed I was on an underwater tram at the airport and it got stuck between terminals.  Under water.

Not sure if I need new bedding or a better brain.

I learned yesterday that I am going to be heading back to work in the office mid-June - having been gone for three months.  I hope I didn't leave any fruit in my desk.  Eesh.

The biggest thing going on at the moment is woodpeckers.

We currently have a pair of woodpeckers living in the vicinity.  I've seen them both, hammering away at the elm and maple trees on our fence line.  I can't tell whether they're building a home, foraging for food, or some combo platter thereof.

I have all but confirmed they are downy woodpeckers - which are 1/3 smaller than their doppelganger hairy woodpeckers.  I also choose to believe this to avoid a plethora of "hairy pecker" jokes, though downy isn't better by much.

When I was in 5th grade, I was in a TAG class that was discussing endangered and extinct species, and as a result, I had that very much occupying my thoughts - the birds, especially.

So one day, I came home from school - Dad was still asleep (he worked nights several days a week - 11PM to 7AM - so when I got home from school at 3:00, he would be asleep for a little longer.

Anyway, I saw this massive woodpecker outside, and I just KNEW it was an Ivory Billed, and that they weren't extinct.  I screamed for Dad to come downstairs, and he did, and saw the bird.  He told me that what I was seeing was a Pileated Woodpecker, and that they were indeed very similar: 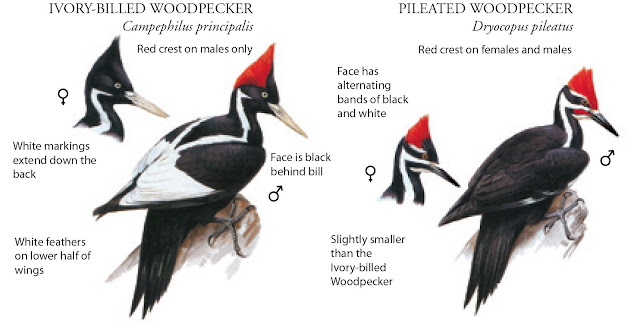 Obviously, a rookie mistake.  Even if he was annoyed, he wasn't mad that I woke him up because he loved birds, and I think he was glad that I did, too.

Now, the fact is, they ended up finding some Ivory Billed woodpeckers in Louisiana sometime thereafter, and so while they are critically endangered, they are not, in fact, extinct.  Pretty sure the dodo and carrier pigeon are both still extinct.

After that, though, Dad bought me a bird book.  I've told the Cedar Waxwing story here before, and I think I even mentioned we saw an American Red Start together.  Plus, the time I saw Redwing Blackbird after he died, and the countless bluebirds, and the oriole, and the owl.

In response to the great Pileated brouhaha, Dad gave me a bird book - I believe it's still at their house - I own several others, so that's neither here nor there.  But I thought about him when I saw these guys.  They're really sweet.  And they just keep hammering away at things to get what they need.  I think that's a pretty good message for the state of things as they are.

Make your home, feed yourself and keep hammering away.  Also, dressing in black and white, with a pop of color is flattering.

Hang in there, friends.

Christopher said…
We have a pileated woodpecker who insists on drinking out of the hummingbird feeders right now. There are two large feeders and he looks pretty funny hanging off of them while he sips. There's also a small one stuck to the window and he's tried everything he can to drink out of it. It could be the influence of cartoons but I think he's purposely trying to be funny. Or maybe I'm just easily amused.
He drops by early in the day and the hummingbirds come by in the afternoon and evening so it all works out.
May 14, 2020 at 11:45 AM