The Return of Billy Whiskers 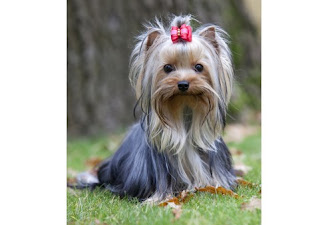 The Yorkshire Terrier.  My late grandmother, who we called Baba, had four of them.  Penny, Fatback, Lille Mus (Danish for little mouse) and Minnie Paws.  Yeah.  So.

These dogs would swarm whenever I went to her house, which was often.  I was 2, 3 years old, and I was overtaken by them, and I didn't like it.

When I was five, she moved to Jamaica, and by then the dogs had either died off or were given away - this was 40 years ago, I don't know what was happening back then.

In Jamaica, she took in a stray she found - a true island mutt she named Tippy.  That was a sweet dog, and we adored her. She later had two other dogs, Killer and Mille, and that is another story for another day.  More like a written confession.  Anyway.

But those fucking Yorkies unnerved me.

The thing is, Baba had a history with the breed.  She had, when Dad was a little boy, a female in heat, and she called her friend who had a much in demand stud.  He was small, and that was a desirable trait in a Yorkie.  So the friend brought over her stud, Billy Whiskers.  My father recalls that Billy needed to stand on a phone book to get the job done.

I was reminded of this, all of it, when this morning, a small male Yorkie came into the back yard.  He and Piper had a great time playing, though he was bad to try and hump her, the edge of the porch.  There was some thrust happening.  No contact, just attempt.

Finally, he came close enough that I was able to grab him - I knew he belonged about five houses down, so I popped a leash on him and took him home.  His name, I learned, is JJ and his owner was relieved that he had been returned.

So, that happened.  Then, in a meeting today, our boss asked the team who inspires us.  All of my teammates cited their grandmothers, plus a shout out to Oprah.  I, on the other hand, said that in spite of my grandmother's upbringing, my father was an amazing man, and a terrific father and he was my inspiration.

I left out the bit about the fucking Yorkies.  And I mean fucking both as an adjective and a verb.

My grandmother was flawed.  She drank, apparently she caroused, and she was cruel to my father.  But I think her parents were cruel to her. My father halted the cycle.  I am grateful for that.

I am grateful that Piper had a little playmate today, but that wet Yorkie fur smell reminded me of the demons my grandmother had.  Honestly, they were probably great dogs, and it's a fine breed.

But it's weird what you remember.

Meanwhile, we quarantine on, and I have been jonesing for ice cream.  And gravy, and some blue cheese/walnut pasta.

And a meal I didn't cook.

And I just want to go to a store and "feel the merchandise" -that was a Babaism.

Well, you know - I hope you are getting some interesting surprises, and that your sexual relations don't require something to stand on.

But if so, be careful.

And if you see a Yorkie, say hello - they can't help their weirdness.