on April 08, 2020
Once upon a time, my father was telling us about a show he had seen the night before on late night cable - I'm guessing it was Real Sex or something similar.  Anyway, the topic was people who like to get dressed up as clowns and have sex.  He was just fascinated by clown sex.  Can you blame him?

For a period of time after that, we gave him clown-themed gifts.  Matt gave him a coffee table book of photos of clowns.  I bought him a knit hat that was made to look like a clown's face, and my mother once sent him, for Valentine's Day,  a dozen red noses.

If you can picture it in your mind, the idea of clown sex is pretty funny - unless you find clowns scary, in which case, it's probably terrifying, knowing they could be procreating.

I couldn't tell you what made me think of that, except that I was thinking of the song Tears of a Clown, and I thought that made for a pretty sadly titled blog post.  But clown sex, that's a headline, my friends.

The fact is, I am settling into Working From Home about as well as I am going to.  Piper and I have a rhythm, a routine that seems to work for us, more or less. I'm getting more used to working from home, sheltering in place, and so forth.

Here's one funny little aside.  Last week, the keys on my laptop started malfunctioning.  I put in a ticket with our IT department, and the upshot was, I needed to trade out for a different laptop.  These things happen.

So, I went over to our Sistership - that's the big office in Nashville, located about five minutes from the house, over on West End.  The woman at the front desk checked me in, and gave me badge access to the building.  A woman from the housekeeping staff was busy wiping down door handles, elevator buttons and so on with disinfectant spray.  All of the floors had Purell dispensers.  The place was immaculate.  I sat six feet from Mark, the IT guy while he moved info onto my new laptop from the old one. I stopped and got him a dozen glazed from Krispy Kreme, because you take care of IT, they take care of you.  See also:  Maintenance.

Anyway, I got my new machine, Purelled up really good, and got out of Dodge.

That afternoon, HR sent out an email.  A security guard who had been working at that building had tested positive for C-19. They were closing it down to do a decontamination.

I did what any other sane person would do.  I laughed.

The good news is - the guard had not been there for several days prior to my visit, and I had very limited contact with other people.  I suspect that I had more exposure to risk three days prior at the grocery store.  I am not showing any symptoms, but I will say that with the pollen going full force right now, My nose feels like it's packed with caterpillars.

Nonetheless, today I am outside working with the dog, and all is well on that front.

I check in with my mother each day, and she seems to be doing well - I think the lack of structure is probably hard on her - and truth be told, she isn't 100% back from the pneumonia.  But she is having dinner with Jorg most nights, or they have coffee, or whatever they need to do to socialize - and I think that's good.   She's hosting Easter dinner - just them, plus his son and the son's girlfriend.  I know she doesn't have the ingredients for a meal stockpiled, so I suggested that rather than risk her neck going to the store, she should take advantage of one of the many places in her town offering curbside pick up of a complete Easter dinner.  I found one that was $85 for entree, three sides, rolls, deviled eggs and dessert.  Are you freaking kidding me?  Dinner for four, and I don't have to cook it - that's a steal.  You're suppoting a long-time local business that has been there for years.  DO IT.  She asked me if it was a cop-out.  Uh, no.  I'd do it if I were there. We'd have leftovers.  So be it!

I looked to see if any of our local places are doing something similar - they are, but it's $130, or more, and in a lot of cases, brunch rather than dinner.  Curbside eggs?  Hard pass.  Cracker Barrel might be an option, but truthfully, I have food in the house we can prepare for Easter.  Not really a big deal.

Especially given that one of us (me) celebrates Easter as a holiday to welcome spring, and the other (my husband) celebrates it in the traditional Christian sense.  Matt isn't a current church-goer, but he was raised in the church, and it is a part of who he is. We both like candy, though - so we come together on things like jelly beans and chocolate bunnies.  Food really is the glue holding our society together.

I don't know what Piper celebrates or believes.  I think Dog may be its own religious affiliation.  Or maybe it's more about breed?  She worships at the altar of the Terrier Divine.

If there is, in fact, a Hell, then apparently, I'll be there for blasphemous thoughts such as this.  Among other reasons.  See above.

Anyway - that got deep quickly.

All of this to say, my mood is improving.  The curve here in Nashville is showing signs of flattening, though, Monday, this started showing up in everyone's news feed: 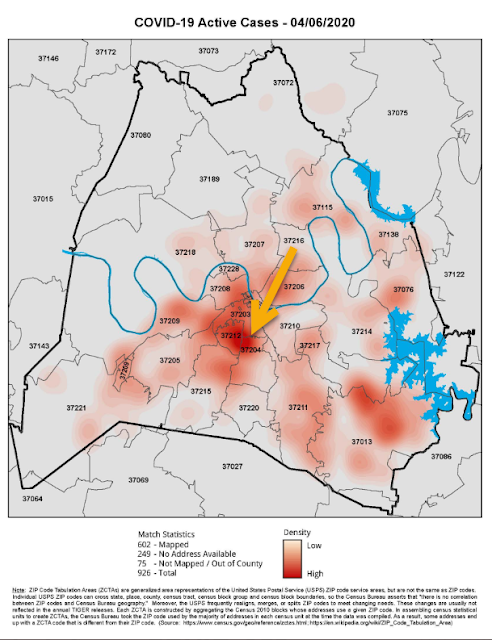 See that arrow - that's pointing to where I live.  Now, to be fair, it's just minutes from Vanderbilt Medical Center, and I figure that has to contribute, right?  High density population, too.

But we're in a hot spot.  I'd love to see that along with a street overlay, because I am curious if there are apartment complexes contributing, or neighborhoods with lots of kids out of school, or nursing facilities... I have questions, dammit!

And eventually, we'll all get answers.

Til then, keep on keeping on, and if you're going to have sex with a clown, put down a tarp.  All that grease paint, it's gonna get messy.

Christopher said…
From the map we appear to be in a warm spot which isn't great but is better than hot. Easter will definitely be a quiet affair this year, and for Passover, well, the question, "Why is this night different from all other nights?" is taking on a very different tinge.
And then there's the joke about two cannibals eating a clown and one says, "Does this taste funny to you?"
April 8, 2020 at 3:26 PM