Can we still say "going viral"?

on April 16, 2020
So, last week, I submitted a tip on my company's intranet forum, talking about the virtual lunches I've held with co-workers.  It was a one-off thing, I didn't think any more about it.

Then I got an email from corporate communications asking if they could publish an article about it on the company internal webpage.

Well you know me, I love attention.  So I answered some questions, sent them a photo, and within 24 hours, I was FRONT PAGE NEWS: 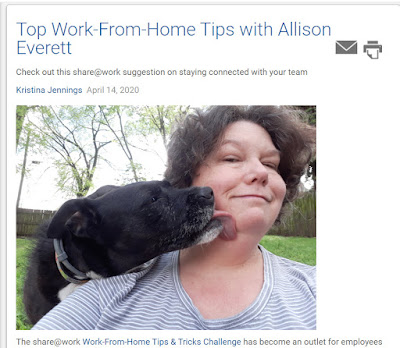 My friends have all left positive comments, but so have some strangers - including some people pretty high up the food chain.  Does that matter?  In the grand scheme, no.  I just put it out there as an option for fellow extroverts who needed some people to help recharge.  The fact that I have a cute dog doesn't hurt my odds, either.

But it feels good - it's another in a series of signs that I am where I should be.  That was evident pretty quickly, and has stayed evident for nearly three years.  Where does the time go, I ask you?

I mean, Piper has aged a fair amount in those three years, too.  Bless her fuzzy little muzzle.  Actually, she's got a middle-aged limp at the moment.  I checked the paws - they seem fine, nails too.  I can't feel anything wrong with the bones, and the joints all move pretty readily.  If I were a betting woman, I'd say she jammed a muscle in her shoulder, and it's strained and sore.  That's my diagnosis.  I don't want to have to take her to the vet for a bunch of reasons - I can certainly afford it, but I just don't want to have to juggle that - their protocol is stricter than anywhere else.  They take the dog from your car, get her into the clinic, see her and bring her back.  That sounds like a recipe for disaster.   And she's moving around OK.  So if she's not better by the weekend, maybe we'll take her in Monday.

It's hard to have a dog - they can't tell you, "Hey, I was jumping to try and climb that tree to get the black and white cat that sometimes comes around, and I was barking, and Zoomer next door was barking, and shit got intense, and I came down off the stone wall wrong and messed up my shoulder.  Can I please have some muscle relaxers?"

Don't we all want some muscle relaxers?  Flexoril, Soma - I'm not picky.

I sent in a piece to McSweeney's - I fully expected it to get returned, at which point, I'll post it here.

We ordered some groceries - half at Kroger, the other half (all the perishables) from our local coffee shop who has made a serious pivot in this new economy.  I'm not mad at them - local produce, fresh meats, local baked goods, local dairy.  Yes, please!

We're getting used to the new normal.  I wonder what the new-new normal will look like once we get back to "normal".

As we say in my Person First training - "Normal is just a setting on your washing machine.  Why not be Gentle instead?" 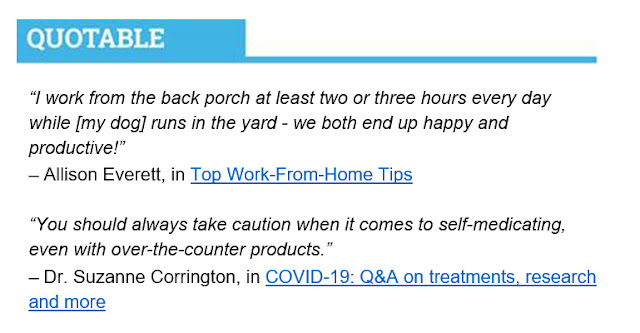