So, on Monday, Iowa caucused, and because there were some glitches with the tallying app they used, it took nearly a day to get results.  It looks like Buttigieg by a whisker, followed by Bernie, Warren, and Biden.

I'm just as surprised as the next guy.  But I have no problem with any of the candidates, or,  more accurately, I have some small concern about each candidate, so no one of them is odious enough that I wouldn't vote for them.  Do I have preferences?  Sure, but I think that there are a lot of good options.

The State of the Union was Tuesday and I did not watch.  I had dinner with Jim, then went to Target, Walgreens and home.  And there was a Preds game, so...

Truth be told, SOTU has never been a big draw for me.  I can read the news and synthesize it into useful information.  And I find them to be infotainment - a lot of spectacle and hot air, and not a lot of substance.

That is how I feel even when it's my candidate in the office.  Long boring speeches are boring.
I used to zone out in church, too.  I can remember exactly one sermon I've ever heard, and it was short, interesting, to the point, and I heard it in my late 20s.  Female minister, Presbyterian Church.  Her premise was, if you see things wrong in the world, you can't do everything to fix them, but you can do something.  So do something.  Good advice, really.

I am starting to feel a little panicky.  I feel like my calendar is starting to just avalanche into a morass.  Which happens, and that's just how it is.  But it still makes me feel freaked out that it's February, and I'm already looking ahead to July.

It doesn't help that all the catalogs are coming out with their spring and summer clothes. It also doesn't help that the weather is all over the place.  Monday, it was 60-70s warm, sunny. By Wednesday, thunderstorms and flooding.  Today, snow.  Kind of.

It's a dusting - nothing to get beat up about, but the schools all closed, and that's always superfun.  But we make it work, people.  We just do.  Actually, I don't mind having closed schools - it inevitably makes my commute a breeze.  Which it was, minus having to keep the washer fluid working on the brine.

In Nashville, we don't always salt.  Sometimes, in advance of snow, they brine the roads.  Great for roads, terrible for your car.  And since it was so sunny recently, I washed my car, like the sucker that I am.

Which reminds me, I have a Valentine's gift to buy.  Since my husband rarely reads my blog unprompted, I think it's safe to tell you what's up.

I'm getting him a few of these: 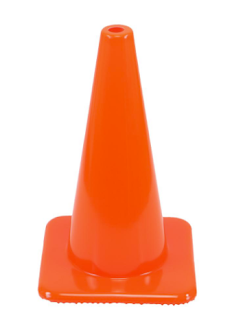 Safety is sexy.  These are for our back alley, when Matt is parked in back, but has a blind exit... I'm happy to be a spotter, but these are pretty sweet, too.

None of that was meant as double entendre, by the way - we legit need these cones.

By the way, don't be weirded out by the fact that he doesn't read my blog.  He doesn't lean into social media at all, and this is just a long form version of Twitter, to him.  If there's something I want him reading, I point it out.

Incidentally, my creativity has been sort of sapped recently.  I really, really want something great to submit to McSweeney's, but my brain is capable of a single rhyming couplet, but I need a villanelle.
Yeah, we're going highbrow today people, drop your socks and grab your...building blocks.

Not that highbrow, apparently.

Big plan for the weekend is an escape game with a friend who is moving to Ohio.  I offered to get a cake for the occasion so that I could have written on it "Congratulations on Your Big Escape", but I was told that another friend is baking for the occasion.  I hope it's brownies.  Man, I love brownies.

Other than that, laundry, groceries.  I have a trip to Birmingham next week, and a Lunch and Learn (where I am not the lead, which is good - it's Black History Month trivia, and I have zero street cred for that), and a doctor visit, and a new colleague starting, and a group lunch, and a corporate town hall, and a Valentine's Ice Cream Social.  Oh, shit, and a networking event one evening.

The good news is, on Valentine's Day, I will stop at Gabby's, buy me and my man a fat hamburger, and we'll catch some sweet, sweet hockey on the TV.

Because love is beautiful, comfortable, and pairs well with fries.