It's worth noting, I was born two years after the show premiered, and I was in second grade when the finale aired.  So I was not an original, real time fan.  I started watching in the re-run era.  M*A*S*H* was always on some channel, somewhere, at any given time.  I have not seen every episode, but I have seen a number of episodes many times.

I rented the finale from the video store in fifth grade, and I enjoyed it.

I finally saw the movie after I moved to Nashville.  In my youth, it aired on TV fairly often, and I remember once sitting down to watch it just before my Freshman year of high school, when the boy I had been "going with" in eighth grade called to let me know we weren't going together any more.  No shit.  We hadn't spoken all summer, he was going to a private High School, and he was kind of a pompous piece of shit.  So.  Yeah.  That derailed my viewing, and I didn't have a chance to see it in full until much later.

It's a fun movie.  Disjointed in the way that Altman films are, but still, good.

I have some thoughts on the show.  I preferred BJ to Trapper John.  I loved both Col. Blake and Col. Potter equally, for totally different reasons.  I preferred Charles as a human being, but I think Frank's character arc was funnier, even if I wanted to kick him in the teeth.  Margaret was kind of a bitch, but I felt bad because she was so lonely.  Radar and Klinger were both interesting characters.  I loved Klinger's dresses, I appreciated that he got things done - but I appreciated the gentleness that people treated Radar with.

But let's talk about Kellye. 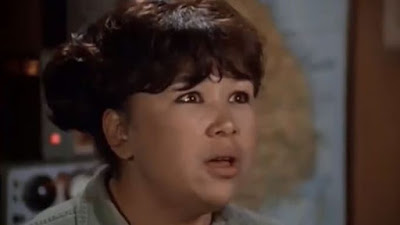 She was always there, in the background, doing her nurse-y things.  She was cheerful and efficient.

And then, in one of the later seasons, she got her own story.

I did a little research, just to see if what I remembered was accurate, and it basically was.

The episode is called "Hey Look Me Over", and focuses on two stories.  In the first, the nurses return after having been evacuated for safety.  The place is just a wreck, and they learn they have to get it together quickly before an inspection from one of Margaret's superiors.  So everyone pitches in and cleans up.  Which brings us to Kellye.  She ends up staying behind after the clean-up is over to fix something that Hawkeye didn't do.

When she finally gets to the O Club (and this is where my memory kicked in), she asks Hawkeye to dance, and he does a fast one with her, but then awkwardly suggests a drink when the slow song starts playing.  They're having a drink, she starts to tell him a little about herself, but he starts checking out other nurses and she leaves.

The next day, she lays into him for being a shitbird.


You never saw me, period. And why? Just because I'm not 5'9" and slinky with long blond hair and a perky little nose that would fit in a bottle cap. You haven't the faintest idea how terrific I am. For your information, I happen to have a fantastic sense of humor, a bubbly personality, and I am warm and sensitive like you wouldn't believe.

I also sing and play the guitar, and I'm learning to tap-dance. And on top of all that, I happen to be cute as hell.


Shortly after that, he sees her talking with a dying patient, has an epiphany and goes to apologize to her bearing flowers.   She thanks him and sends him away because she's on a hot date with the fussy inspector's Aide.

So, remember when Louis CK was still funny and relevant and not a predator (well, he was still a predator, but it wasn't public yet)?  There was an episode of his show, Louie, that featured Sarah Baker.  The title was, "So Did The Fat Lady".

In it, Sarah, a waitress at the comedy club, bends over backwards to get Louie to go out with her, and he grudgingly does, and she delivers a lovely, honest speech about being a fat woman in a world that values thinness.  She talks about the double standard that a fat dude feels he deserves a hot woman, but never the other way around. The writing in the episode won an Emmy.

Of course, now we know that CK, who wrote the episode is a total shitbird, so maybe I have to like it less?  I don't know.

What I can tell you is, Sarah Baker is the bomb.  She plays Zach Galafanakis' wife in The Campaign, and she's a delight.  She's in Mascots, which was pretty terrible, but I loved her anyway.  She's funny.

When I was younger, there were not many girls or young women on television who looked like me.  And by that, I mean bigger.

Bigger girls got roles like Aunt Bee, or Housekeeper, or Woman in Grocery Store #2.

The ones who looked like me were Kellye and then, Natalie in The Facts of Life.  For Natalie, her "redemption" was extreme intelligence and sarcasm.  She wasn't as edgy as Jo, as cute as Tootie, or as rich and shampoo model as Blair.  She was, is, and ever shall be, the funny fat friend.

But good for Natalie for being the first of her Eastland Crew for losing her virginity to her TV boyfriend Snake.  They offered the story line to Blair, who said hells naw.  Lame.

And I wasn't even that big as a kid, honestly.  By current standards, I was a little heavier than my peers, but never massive.  Even now, I'm what they call "Lane Bryant Fat" - meaning, I can walk into a number of stores and buy off the rack.

So, interesting story.  There's a show that's very popular on TV called This Is Us, and it features a woman who is quite overweight.  Now, I don't want to fat shame her, but I do want to call her out on her bullshit.  According to a number of publications, we wear the same size, are the same height, and have similar measurements (within an inch or two, and mine are always bigger:


OK, maybe the angles are a little different, but she had a stylist, makeup artist, hair, wardrobe, a professional photo and lighting.  It's also safe to say, they airbrushed her.

This is all me, camera phone (photo credit to Bailey, who I love), on a typical work day.  I didn't prep for it except to copy Chrissy's pose).  Clearly, we could be twins, right?  She could pop on the dress I'm wearing and just be swimming in it.  Obviously.

Come on, sister.  If you're going to make millions for your acting/weight loss "journey", at least own that shit.

Anyway, back to Kellye.  After M*A*S*H*, she did voiceovers for AfterM*A*S*H*,  See what I did there?

Beyond that, she focused on watercolor, which is what she had been doing before the show,  She had a few small rolls, and that was that.  Then, after a short battle with cancer, she died at the age of 72.

Christopher said…
I remember watching that episode of M*A*S*H during its first run and, naive child that I was, wondering why there weren't more episodes featuring Nurse Kellye. I thought that episode was going to be the beginning of her entry into the main cast. I'm sorry it wasn't, but it is a good episode.
And I'm glad you brought up The Facts Of Life because Natalie was always my favorite character. She got put through some stuff, too. She didn't just lose her virginity. She also survived a sexual assault. As the show progressed she also pursued being a writer, which I like to think was both the writers' way of apologizing and saying that she was more than just a friend. She was one of them.
February 19, 2020 at 12:41 PM