on February 24, 2020
I try to cook most nights.  Especially, now that I am not traveling very often, I have the opportunity to shop, cook, and avoid takeout.  Now, I'm not entirely successful - I pick up burgers from Gabby's on Friday nights, because they're open late that one night a week, the food is amazing, and I'm supporting a local business.  We also do a lot of takeout for breakfast and lunch on the weekends.

I'm better - not perfect, but better.  That said, Saturday night, I was over it, and I got takeout from Panda Express.  A lot of it, as it happens.  Enough that they gave me four fortune cookies.  I'm glad they think I have a family rather than an eating disorder.  That's optimistic of them. 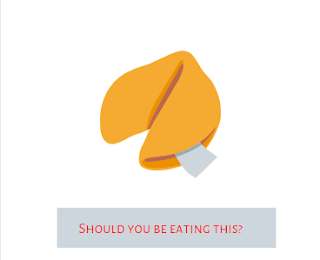 To be fair, we did not eat it all that night.  We had dinner Saturday, lunch Sunday, and there's still a metric ton leftover that one of us will polish off, either for lunch tomorrow or as a midnight snack.  I don't judge.

Just kidding, I totally judge.  That is the entire point of this.

There are currently two ads on television about kids and dinner, and I am judging.

As I think I've mentioned, there is a short, short list of foods I just categorically don't eat.  And even then, there are some, "but..." exceptions.

I don't do mushrooms (if I can help it).  I eat around them, omit them, or, on rare social occasions where I have no choice, I suck it up, buttercup.   For example, once I was at a wedding, and I took a passed hors d'oeuvre, not realizing it was a stuffed mushroom.  I ate it.  I didn't enjoy it, but I was polite.

The other one I just don't do is calamari.  Again, I once had to eat a piece at a work dinner.  In an attempt to get a small piece, I managed to extract one that was an explosion of tentacles.  Picture a deep fried chrysanthemum, and you get the idea.  I gracefully made my way through it.

It's not all bad, though.  I ended up learning I like hard boiled eggs after eating egg salad a friend's mother made us for lunch.  The second time I tried sushi, I realized I don't hate all sushi, just certain kinds.

But growing up, we ate all kinds of things because that's what was put in front of us.  We ate native foods in Jamaica when my grandmother lived there.  We ate fruit and vegetables without questioning what they were or where they came from.  For a time, my sister didn't like chicken because it bathed in the dirt.  For a short time, I didn't like hot dogs, but I got over that.   That said, we were basically the least picky eaters you have ever met.  Or, that's how I remember it.

The truth is, it's OK to not love certain foods.  I'd be better off if I were more discerning in my repertoire.  I like healthy things, but I also love garbage.  It's a problem.

But - and here's the point I wanted to make - there are two ads on TV that bug me.

The first one is a mild irritant - it is an Ore-Ida French Fry ad that suggests you use crinkle cut fries as "currency" to get your kid to eat the things that are less appealing than a crinkle cut fry.  I can take that one in small doses.

The second one is part of a campaign, and there are several ads.  But they all follow the same blueprint.  Mom wants kid(s) to eat healthy dinner,  kids complain.  Mom brings out a bag of pre-shredded Kraft cheese, cue "Only Time" by Enya, and watch as slo-mo shredded cheese cascades onto the plate of whatever.  Broccoli, tacos, pizza.  Kids eat and peace is restored.

There are at least two variations I can swear to, and a third I feel fairly certain of.  But the point is, the kids aren't going to eat until Mom brings out the big guns.

Now, I can't say I don't use cheese as a major ingredient at least once or twice a week.  I love it more than Matt, but we both eat a fair amount of it.  I could go vegan, if not for dairy.  Vegetarian, bring it - but deny me ice cream, butter, sour cream, cheese... go fuck yourself, seriously.

So, I'm not averse to using cheese, but I don't have to hide dinner in it and force it down Matt's throat like I would if I were giving Piper a pill.  Hell, Piper takes pills more easily than many, many kids eat dinner.  I'm just saying.

And there's all kinds of stuff at play - I know that there are sensory issues, and super-tasters, and food allergies, and food sensitivities... I get that - I do.

Honestly - maybe it's just the Enya song that irks me.  I had to take Modern Dance in college.  Basically, back then - and probably now, for all I know - they would bar you from registering for classes if you didn't have enough physical education credits  - so, I had to get into whatever fit my schedule in order to get into the rest of my classes.  I had already taken Intro to Badminton.  This time, the class that fit in was Modern Dance.  So, imagine me flailing un-enthusiastically in a leotard to Enya.  Enya was big back then.  My sister, at her school, was also flailing to Enya in her own Modern Dance class, one state away.

The leotard was the real indignity, if you must know.  There were two guys in the class, and they got to wear sweat pants and t-shirts.  What the actual hell?  Weirdly, I also remember that same term, we had to go to a dance performance as part of our grade.  I went, and I had a terrible sunburn from being stupid and going to the pool at Tanya's boyfriend's apartment without sunscreen.  I was just so happy to be invited to go somewhere, I didn't even bother with sunscreen.

I may have been flailing through most of college and in fact, life.  Not just dance class.

The recital or whatever it was, was lackluster and uncomfortable.  Much like my moves in class.

Look, it doesn't matter whether the ads stem from my own issues with food, or my issues with exercise - they're in heavy rotation during hockey games... and they bug me.

Maybe I should bust a few moves whenever they come on...

Look, hang in there, you do you, and have some dinner.

With or without cheese - that's on you.