on February 15, 2020
The other morning, I came in late because I had been to my doctor's office.  And I found out that there had been a critique made of a painting I had created.

So, some months back, I went to the goat yoga place for a painting class.  And when we moved into the building, I put up my goat painting on an empty hook next to the CEO's office as a joke. 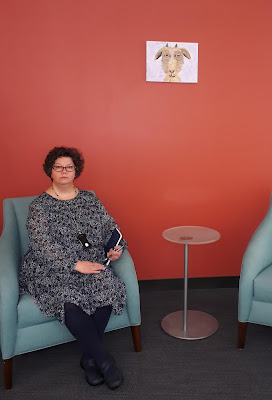 Joke's on me - the CEO likes it and has kept it there.

Anyway, one of the guys in my office who I've had some friction with told the people in my area that the image was incorrect - that goats have pupils like people.

Except they don't.  Goats have rectangular pupils.  You know why?  To increase their peripheral vision, which, when you're an easy target for predators, is a pretty solid need.

I know this because I am close personal friends with a few goats. 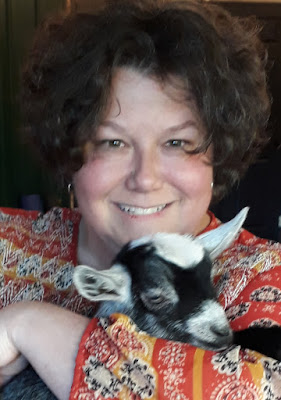 This is the thing though.  A few months ago, it became apparent through a few Facebook posts that there had been a schism in the goat business.  The couple that owned/ran the place separated.  And the one I knew better, was friendly with, ended up leaving the goat lyfe.  Her former partner appears to still be running the place, but the social media presence kind of fell off, and the classes tapered down a little, and I don't know what to do. I still love goats.  I still want to occasionally hold goats and feel their warm little bleaty bodies in my arms.  I don't care if I never do yoga again, but I need some goats in my life.

But it feels a little weird to go back to the scene of the crime (as it were).  I would like, under the circumstances to stay friends with the non-goat partner.  She works in a career tangentially similar to mine, we're similar age, politically aligned.

Her former partner is not the warmest person, though I think they appreciate that I like the goats, and that I mean well.  And I think they do a great job of caring for the babies, and I appreciate that.  But I also don't want to take sides, and I don't think it was an amicable split.  Which, happens.  It sucks, but it happens.

Realistically, though - I would never see the non-goat person socially, were it not for the goats.

And it's a business transaction to go see them.  It's not about either of these people and what did or didn't go down.

Christopher said…
It didn't occur to me until just now, thanks to you, that cuttlefish and goats have the same sort of eyes. Or at least they seem to. Cuttlefish and goats are also equally adorable--and anyone who knows how I feel about cephalopods knows that's not a joke--although goats are generally easier to play with, which is good because we could all use some goats in our lives.
February 18, 2020 at 8:39 AM