Valentine’s Day is in the books.  We had a quiet little family celebration.  I love people in my life every day – why limit it to a single rando day in February?  Exactly.

We haven’t had much of a winter this year – I realize that’s a dangerous statement to make in the middle of February – we’ve had the tables turned on us in March enough times to know that you can’t really call it safe until you hit April 15th – Tax Day.  We haven’t done our taxes yet – I would like to be gone when that’s happening.  Money and finances just stress me out.    But as far as winter goes, it’s getting up into the 60s today.  It will be summer before we know it.

That reminds me – I ought to see if Macy’s has any sheets on sale.  I’m recently obsessed with percale bedding – it’s the cotton that feels nice and crisp, as opposed to the soft, satiny cottons.  It’s not as common as I would like.  But as someone who overheats in sleep, it’s a good thing.

I have had, for what it’s worth, some really terrible dreams lately.  Last night, it was about finding a lot of drowned animals (rats, cats and raccoons), and the night before, I was unable to find any clothes that fit to wear to my family’s Thanksgiving.  And they were all giving me a hard time about being too fat to get dressed.  It was odd, disorienting and upsetting.  Apparently, I really, really need to start my diet and keep animals away from water.

I’m not saying new bedding would help, but it can’t hurt.

Work is good – I’ve been writing a lot of training materials,  newsletters, etc.  It’s good stuff.   We have the potential for things to get crazy in the coming months, and I say BRING IT.

I gave Piper a bath over the weekend at the DIY place on Charlotte – Wags and Whiskers for the locals – can’t recommend it enough.  One woman brought in her pit bully-esque dog while I was there.  Her name (by her, I mean the dog) was Oreo.  She was mostly white with black speckles all over.  I’d have called her Cookie, because she looks like cookies and cream. Whereas Piper, who has a Double-Stuf of white straight down her chest, looks more like an Oreo.  Which was the name NHA gave her.  Her first owners called her Cujo, for which I say, they got what they deserved. 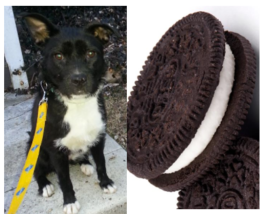 People should pay me to name their dogs.  I’m just saying.  I used to want to name the OPI nail colors, but now, that seems a little overdone.  In that tangent, I am trying to wait as long as I can to get a pedicure this year.   I already want one, but I may just setting for a gel mani sometime soon.

So, one thing on my mind this week is that Thursday, the 20th, would have been my parents 50th Wedding Anniversary.  We celebrated big when they hit 40, because I think we knew that he would be gone for 50.  We were right.  I don’t always enjoy being right.  Just sometimes.  I don’t know that I will commemorate the day in any big way.  I might make a donation to charity in their honor.  Maybe a political one.  I don’t know yet.   I have a few days.

Meanwhile, one of my friends has been seeing Cedar Waxwings in her neck of the woods, and has shared them with me.  She knows my father sends me birds.  Or, maybe she thinks my father is a bird reincarnated.  It doesn’t matter to me very much – I’m just glad to know that his energy lives on in some way.