By sometimes, I mean all the time.  I don't know - I can handle jokes at my expense.  I have a sense of humor.

But when people are critical of me, it's like death by 1000 paper cuts.   And let's get real - there are reasons to be critical of me from time to time.

Anyway, recently, twice recently, I received some criticism that was mildly delivered, and not at all well received.

Hence, the need for thicker skin.

On the opposite side of that, though, I've received some feedback that was really, really good - and with that, I tend to discount and not believe or accept that.

This is something I work on in therapy.  Which means I still have work to do.  Hint:  your therapist is never going to say, "Ok, you're good.  We fixed everything, you're free to go."  That just doesn't happen.

I've said it before - this time of year for me is always something of a slog.  I'm trying to eat right, as of this morning, hahahaha.  But really, today is a new day, and I need to get off the sugar.  Again.

But the weather, the dearth of sunlight, and the general grayness of the world makes the winter a challenge.  And the thing is, we're nearly done with winter.  I mean, it's basically February at this point.  Groundhog or no, we're six weeks away from the time change, warmer weather, green flora, baby fauna, and the renewal of our environment.

Also, in the same vein as groundhogs, you know what's cute?  Nutria! 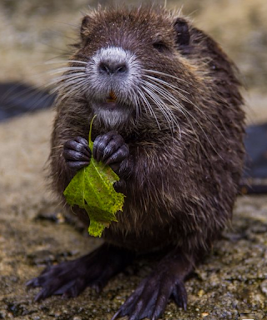 I got to see baby nutrias at the New Orleans Zoo.  I love them so much.  Once upon a time, there was a marketing campaign to try to get people to eat nutria as food.  Apparently, they're nutriatritious.  Not sorry.  I'm not going to pass up a softball like that one. For real, though, the nutria as food did not take off.  I assume because some people found them cute, and other people took issue with eating a ratlike creature.

Along similar lines, today, as I was driving to work, I sailed right past the Briley Parkway exit, and I had to turn around at the next viable option (Donelson Parkway).  As I was navigating my overshot, the radio started playing Muskrat Love.  Which is the weirdest song.  It's super sappy.  There are lyrics that refer to nibbling on bacon, and chewing on cheese.  And then there are the little synthesizer sound effects meant to mimic a pair of muskrats.

I really want to know how high the person who wrote that song was at the time.

And why am I sailing past my exit?  Well, it's happened twice before, and I think my brain was on autopilot.  I was thinking about a book I read several years ago, and trying to remember a plot-line, and I guess I was too engrossed in that.

I really ought not multi-task.

Christopher said…
I'm not sorry that I laughed out loud at "nutriatritious". That is funny even if they are too cute to eat. Also there's a video out there somewhere of "Muskrat Love" with a pair of tiny muskrats (okay, people dressed in muskrat costumes) dancing on The Captain's hat while he plays the keyboard.
All that is just a reminder that however high you think people were in the '70's they were even higher.
January 30, 2020 at 2:56 PM