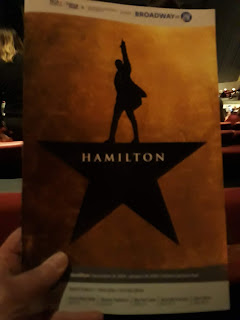 Mid December, a friend of mine posted on Facebook that he was selling a pair tickets for Hamilton.  I messaged him and told him I would take them.  They were balcony seats, and he sold them to me for face value, $79 each.

Until that point, I had no intention of seeing Hamilton here in Nashville.  Tickets had been impossible to obtain, short of becoming a season ticket holder two years ago, which I had not done.  People with better time management and more resources had been successful in securing the remaining seats.  Since I didn't want to spend $500 for a mediocre seat, I decided to set my sights on seeing it elsewhere at another time.

But then I got inexpensive balcony seats.  And it ended up happening.

I gave Matt the right of refusal on coming with me, but he suggested I take Jim.  So I did.

The only bad part is that I went in with a cold.  This freaking head/chest cold has been lazily making its way through me, and that night was one of the rougher ones.  In fact, I ended up taking a half day that day so that I could go home, have a nap and prepare for the evening at leisure.

Our seats were second to last row in the balcony, right of center.  I sat next to a young teen and her mother.  The girl was buzzing with excitement.

So was I, for that matter.

It was spectacular.  It was moving.  It was DRAINING.  I can't imagine how the people on stage did eight shows a week, because watching it for 2 hours and 45 minutes, I felt like I'd had the living hell beaten out of me, both physically and emotionally.

The guy playing Hamilton was great.  He grew on me as the show went on.  Burr was remarkable.  The Lafayette/Jefferson actor was the best - of course, those are the most fun roles in the show.  Mulligan was great.  Angelica, Eliza... and Peggy were all fun as hell.  The weakest actor, in my mine, was George Washington - not because he couldn't act or sing - I just had a different idea in mind of what that role needed, and he didn't match it.

But I involuntarily mouthed the words as they sang.  I couldn't get enough of the costumes, the set, the lighting, the choreography.

Here's the thing.  I had a bad 2016, and the OCR for Hamilton became sort of my source of truth.  I was trying to get out of a toxic situation.  I was traveling constantly, I was exhausted.  My eating was out of control.   I look back at that time, and I really remember Hamilton and specific lyrics that were my mantras.

The one that sticks out was that I had a file folder that contained all my job search stuff.  I titled it Vine and Fig.

It was from the song One Last Time.  Washington talking about leaving office to sit under his own vine and fig tree (a scriptural reference).

When I started my current job in 2017, I remember my first password was a derivation of Vine and Fig Tree.

So, this was kind of a big deal, all things said and done.

And I loved it.

If you ever get the chance, do it.

Christopher said…
I envy you getting to see it, but I also sort of don't envy the balcony seats because I have a thing about heights and it's often hard for me to enjoy things in a seat on the edge of a precipice. But it's impossible to not enjoy Hamilton.
Your personal connection to it must have made it even better.
January 22, 2020 at 11:22 AM